Breath of the Wild: The Isolated Plateau 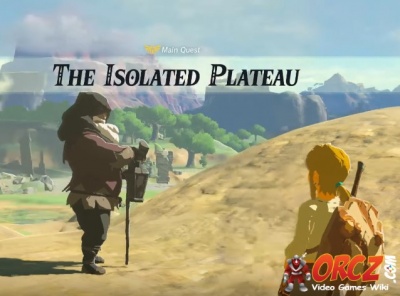 The Isolated Plateau is a Quest (Main Quest) in the game The Legend of Zelda: Breath of the Wild.

You get it at the Great Plateau Tower, after completing the quest: "Follow the Sheikah Slate"

After your descent from the tower, the old man told you that the kingdom of Hyrule was destroyed 100 years ago by Calamity Ganon

You heard a voice coming from Hyrule Castle, but you cannot reach it unless you leave the plateau using the paraglider.

The old man said that he will give you the paraglider in exchange for the treasure that lies within a hidden location somewhere...

After you acquired the Spirit Orbs from the shrines, the old man told you that he'll be waiting in the place centered amid the four shrines, before mysteriously disappearing.

The Old Man explained that there are a total of four shrines on the plateau. He said that he will give you the paraglider once you have acquired the Spirit Orb from all shrines.

He told you to survey the plateau from the top of the tower to find the remaining shrines. He also pointed out that you can use your Sheikah Slate if you need to travel quickly.