Breath of the Wild: The Silent Swordswomen

The Silent Swordswomen is one of the sidequests in LoZ:BotW

The Silent Swordswomen is a Quest (Sidequest) in the game The Legend of Zelda: Breath of the Wild.

Talk with Laine by the Northwestern gate to Gerudo Village.

Laine tells Link that there a hidden treasure if he can follow the Statue's swords to it. This does mean braving a sandstorm.

Laine: I couldn't get a good look at the Divine Beast from here anyway, but I'm glad it's gone. Now, if we could only do something about the monsters and sandstorms. Without those, I'd be able to find all of that treasure hidden out in the desert! If the legends are true, that is...

Laine: Having said that, I don't really know the details either. There are statues of swordswomen scattered across Gerudo Desert. They're remnants of ages long past. People talk about the statues pointing to the hiding place of ancient treasure... but that's just superstition. Even if it was true, there are dangerous monsters in the sandstorms. I wouldn't risk it.

In the Gerudo Desert Gateway, they say that the swordswomen statues point the way to treasure. However, getting there means braving the sandstorms. 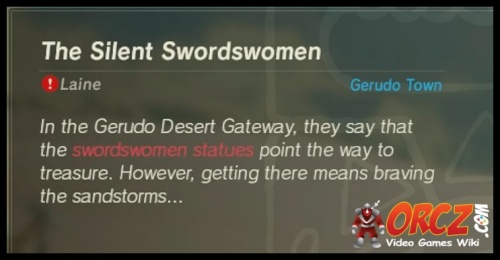 You followed the guidance of the swordswomen statues to find the treasure amidst the desert sandstorms. The prize turned out to be an ancient shrine!