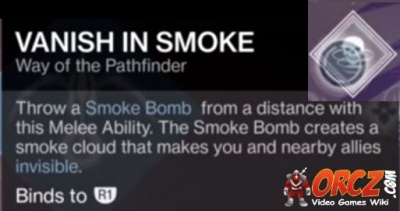 The Vanish in Smoke ability in Destiny 2.

Vanish in Smoke is an ability in the Nightstalker Subclass for Hunters.

Throw a Smoke Bomb from a distance with this melee ability. The Smoke bomb create a smoke cloud that makes you and nearby allies invisible.