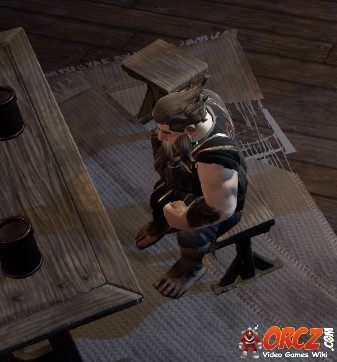 Beast at the Mess Hall of the Hold in D:OS2. Beast is the Dwarf Companion.

Beast is an NPC (Companion) in Divinity: Original Sin 2 (DOS2)

Beast can be seen sitting at the Mess Hall of the Hold and talking to Gil.

Beast can later join your party as a Dwarven Companion.

Narrator — *A broad dwarf sits totally upright on the bench, eyes closed, palms face up on his knees. His beard is a cascade of meticulous plaits, each one braided through with golden medallions. He raises an eyebrow as you approach but doesn't open his eyes.*

Beast - Listen up, boy. You hear that?

Beast - The ship, of course.

Narrator — *A wave of sound washes over you: The unintelligible chatter of your shipmates; the groaning of wood Drom ?oor to ceiling; the boom, crash, and crackle of waves around you, complaints from the sea itself.*

Narrator ‘ *He cocks his ear to the other side, then smiles.*

Beast - Anticipation. She senses something. I‘d hold onto my breeches if I were you, mate. That all you hear, though? Listen close.

Narrator — *His eyes snap open as his countenance breaks into an expression of joy. One great paw claps you on the back; the other catches you before you lose your footing.*

Beast — It's the wheel. The wheel, don't you see, you beautiful idiot! Squeaks whenever the helmsman jerks it clockwise, which means we're heading east. - Burn my beard! That means... if we’ve been travelling for... YES! Only 10.34 nautical miles to Fort Joy...

Beast - Heh. No indeed, boy. But that ain‘t my ?nal destination.

Narrator — *The dwarf leans back from the table and strokes his beard, gold medallions jingling merrily. His eyes roll over to you.*