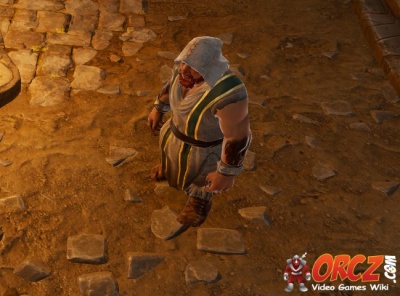 Carson, the Snickering One at the Arena of the One in Divinity Original Sin II (D:OS2)

Carson, the Snickering One is an NPC in Divinity: Original Sin 2.

Beast stumbled upon a childhood friend in the Fort Joy Arena by the name of Carson. He gave us a key that unlocks one of'the prison's doors. Now, we just need to ﬁgure out which one.

Narrator - *The dwarf cocks his head left, then right. His eyes squint and his brows rise as if lifted by an unseen ﬁsh-hook.*

Carson, The Snickering One - Marcus? Marcus Miles? Narrator - *Beast glances at you and mutters.*

Beast - Best let me handle this.

Beast - That‘s Beast nowadays, friend! That other name - long left that behind, I did.

Carson, The Snickering One — Right, right. Sorry. Just hard not to see yeh as that wild-eyed troublemaker you used to be. It's been... what? Over a decade, yeah?

Carson, The Snickering One — Bigger'n what she's already managed? Say a single word against 'er, and a royal copper will throw yeh in a dank cell ’ or carve the royal insignia on your throat. Unless ya got a handful of coin to 'donate' to the kingdom, of course. You're gonna need to blow this pop—weed stand if ya want t'stop her, but maybe this'll help. Nabbed the key off that Kraus fella up above. Not the brightest ofthe Magisters. Would stick 'is head in a pig's arse and call it a hat. Reckon it unlocks one of the doors to the prison, though not sure which. I'd tell ya to take care crossin' the Divine Order, but from what I hear, you can handle yourself just ﬁne 'gainst Alexandar's ﬂunkies.

Beast - Word gets around, does it? Well I appreciate the help. I won't forget it.