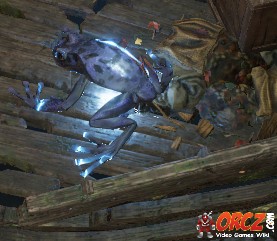 The Charged Amphibian is an enemy in Divinity: Original Sin 2