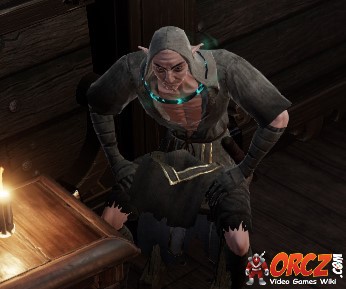 Fane in the Hold in D:OS2. Fane is the Undead Companion.

Fane is an NPC (Companion) in Divinity: Original Sin 2 (DOS2)

Fane can be seen sitting at the Lower Decks of the Hold, close to where Magister Payde is, by the door to the Stern Room.

Fane can later join your party as a undead Companion.

Narrator - *The elfis reading a volume of Cranley Huwbert's famous encyclopaedia. He looks up, his big, round eyes scanning your body, absorbing every detail. He reaches out and takes your hand, turning it this way and that, examining it from every angle. Finally he pinches your skin, gently tugging at it.*

Narrator - *He sits back and returns to his book, ﬂicking quickly from page to page, completely oblivious to your presence.*

Fane - It is simultaneously too detailed and insufﬁcient. I know the beginning ofthis tale and the end, but am rather missing the middle.

[IFAN] *Tell him the history of this land is death and slaughter. He'd be better off not dwelling on it.*

Fane - Oh please, I have no interest in that. Your books are too full of it already. -No, I want to know about the celestial. I want to know about your Gods. This text tells me that they created all creatures, but nothing of what came before. Where did these Gods come from? Who are their people? Where are the others of their kind?

Narrator - *The elf‘s face freezes for just a second before he waves his hand dismissively.*

Fane - Oh it is just one ofmy idle curiosities. We mortals do like to consider these things, do we not? Now please, run along. I have a world to decipher.

Narrator - *No amount ofpestering will get the elfto take his eyes offhis book or respond to your questions.*

Fane is located in the Hidden Alcove just north of Fort Joy.