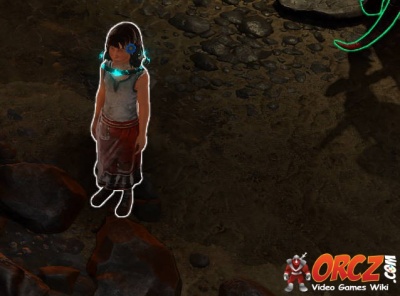 Frolie at the Elf Cave in Fort Joy in Divinity: Original Sin 2.

Frolie is an NPC in Divinity: Original Sin 2

Frolie is a human girl who can be found at the Elf Cave (Caverns) in Fort Joy.

She likes to play with the a boy called Mody and is constantly running around the cave with that kid.

Narrator - *The child ignores you and continues with her game.*

Sebille - *Ask the child what game she's playing.* Frolie - I'm playing Helene, hero of the whole world. That was my mom's name. She died when the Voidwoken came.

Sebille - *Tell the child you're very sorry to hear she lost her mother.*

Narrator - ^Suddenly, the child’s face crinkles into a grimace. She seems on the verge of sobbing when her face goes suddenly still and blank. She smiles at you and continues her game.*

Frolie - Are you from the Ancient Empire? Maybe you know my mum!

The Red Prince - *Say you are, and ask her mother’s name.*

Frolie • Helene. She served the bailiff of the House of Law. She died when the Voidwoken came.

The Red Prince - *Say you never knew a Helene but that you're sorry to hear of her passing.*

Frolie - Helene. She served the bailiff of the House of Law. She died when the Voidwoken came.

The Red Prince - *Say you never associated with servants.* Frolie - Sure you did. They were around you all the time. Anyway. My mom was really great. It's too bad for you you didn't know her.

Narrator - *The child smiles at you and continues her game.*

The Red Prince - *Say you're far from home and probably wouldn’t know her mother anyway.*

Frolie • You don’t know that. Her name was Helene and she served the bailiff from the House of Law. She was really tall and really smart. I bet you did know her.

Ifan Ben-Mezd - *Play along and say how right she is; you must have been mistaken.*

Ifan Ben-Mezd - *Tell her not to believe in foolish fantasies.*

Frolic - You’re the one that's foolsih. And a fantasy. And a big dummy!

Ifan Ben-Mezd - *Say that may be true, but at least you're not playing make-believe in a dank, disgusting cave.*

Narrator - *The child looks around, then back at you. She makes an obscene gesture and continues with her game.*

Narrator - *The child blows a raspberry at you and scowls.*

Ifan Ben-Mezd - *Ask her where she learned her manners.*

Frolie - Manners are for humans. I'm an Ancient. That means I'm better than you.

Ifan Ben-Mezd - *TelI her not to give in to ugly prejudice.*