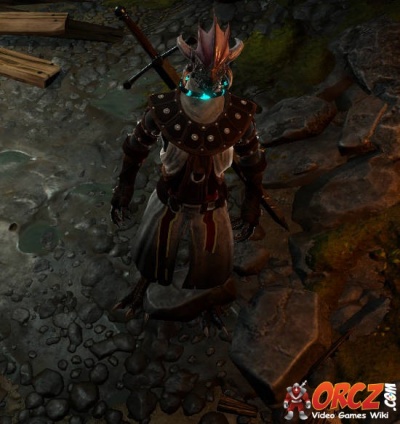 Kalias at the Elf Cave in Fort Joy in Divinity: Original Sin 2. He is the Warfare trainer.

Kalias is an NPC in Divinity: Original Sin 2

He is a Lizard soldier.

Kalias is the warfare merchant of Fort Joy.

Can be found at the Caverns.

Kalias - State your business. Sebille - [SEBILLE) *Tell him to state his house.*

Kalias - The one house; the true house - the House of War. Why?

Sebille - *Tell him you hunt and kill those belonging to the House of War.*

Kalias - A tongue that speaks such nonsense deserves

cutting! I think I'll give you a good thrashing, slave girl!

Sebille - *Let it slide. You don't want to get into a right now.*

Sebille - *Tell him you will walk freely here.*

Kalias - Do. But I'll be watching.

Sebille - *Ask if you may walk freely here.*

Kalias - Certainly. You may not be a lizard, but your kind are hardly so bad as the humans. If it's trade you're looking for, I’ve made a habit of procuring items that can prove rather useful inside these walls.

Sebille - *Ask if he has anything that might interest you.*

Kalias - That's for you to decide.

Narrator - *The soldier stands at attention.*

Sebille - ‘Express your surprise at finding a fully-armed lizard soldier inside Fort Joy.*

Kalias - Do stop gaping. Anything can be procured inside these walls.

Kalias - You are in the wrong place. Pinkie.

Ifan Ben-Mezd - *Glare and walk away.*

Ifan Ben-Mezd - *Tell him you're no Divine Order loyal; he need not fear you.*

Ifan Ben-Mezd - *Ask what he means by that.*

Kalias - Nevermind. If you need to suit up, I can offer you a fair price. If not, I would thank you to move on.

Narrator - *The soldier tightens his grip on his spear and looks past you.*

Ifan Ben-Mezd - *Ask how he remains so proud while imprisoned like this.*

Kalias - If you shared in a heritage so fine as ours, a culture so advanced, you’d remain proud too. But nevermind that. If you need to suit up, I can offer you a fair price.

Ifan Ben-Mezd - [SOLDIER] ‘Salute and ask his permission to enter the premises.*

Kalias - Military, are you? Be at ease here... and well met. Let me know if you need any armaments. I offer them to a fellow serviceman at a few coins' discount.

Kalias - You. The Red Demon. The traitor pig. I heard they'd sent you here, but I'd hoped you’d have drowned yourself before crossing my path.

The Red Prince - *Roll your eyes and say you aren't that re lizard. Contrary to rumours, there's more than one.*

Narrator - *The soldier looks at you hard, his grip tensing around his spear.*

Kalias - No; I suppose the Red Prince is rather taller, isn't he. You’re positively stunted. Sorry for the mix-up. House? The Red Prince - *Say you're from the House of War.*

Kalias - Hallowed are its halls. Please, comrade, I have all you need to steel yourself against the brutes that haunt this place. I will accept no more than a pittance for all you may require.

The Red Prince - [RED PRINCE] *Shout that you're a full three fingers taller than him - the same height you were when you ruled the House of War!*

Kalias - So it is you. Traitor. Pig. Get out of my sight before I report you to a magistcr for... whatever strikes my fancy. No one here will defend you.

Kalias - No; I suppose the Red Prince is rather taller, isn’t he. You're positively stunted. Sorry for the mix-up. House?

The Red Prince - *Ask if it really matters, so far from home.*

Kalias - You should know we are nothing without our people. Now more than ever. So?

The Red Prince - [RED PRINCE] *Bite your tongue and say you’re from the House of War.*

Kalias - Please, comrade, I have all you need to steel yourself against the brutes that haunt this place. I will accept no more than a pittance for all you may require.

The Red Prince - *Stare at him in contempt and remark you remain a Prince of the House. He must bow before you!*

The Red Prince - ‘Step forward and slap him hard across the snout.*

Kalias - *Your strike makes the lizard recoil, but he soon regains his bearing. Slowly he draws his weapon.* When a slave strikes a Master, the slave dies! You are a slave. You die!

The Red Prince - ‘Angrily shout you were framed. You never were and never will be a traitor!*

Kalias - Traitors lie. You say you are no traitor. This is a You are a traitor.