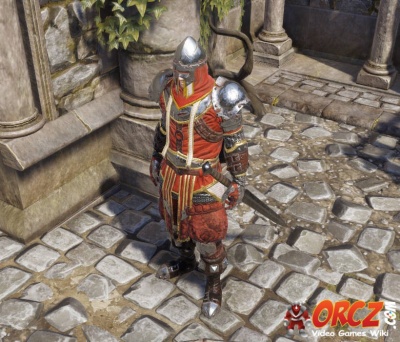 Magister Hansa is an NPC in Divinity: Original Sin 2

Guards the main entrance on the north side of the Ghetto along with Magister Sevek.

Magister Hansa is one of the magisters assigned to watch the entrance to the Ghetto.

Magister Hansa - *Hack!* I got my eye on you, moss- muneher. Don’t try any of that Source business on my watch, or I’ll do to ya what the Hammer did to that traitor!

Sebille - [SCHOLAR] *Say you understand his concerns, but this collar you’re sporting is very effective.* Magister Hansa - Well, that’s true now, innit? With that little ring round yer neck, you can’t conjure so much as ’boo!’. Like a cat without its claws, ain't ya...

Sebille - *Ask what more he knows about Bishop alexandar and Dallis.*

Magister Hansa - Bishop's the son of the dead Divine. Dunno when we'll get a new one, but Alexandar's lookin' after us in the meantime all the same. And the Hammer's a solid sort! Don’t take no guff and don't stand for no idlin' - earned that name for a reason, she did. *Hack!*

Sebille - *Ask when you’ll be allowed to leave this place.*

Magister Hansa - When you give up the darkness that’s inside you! T'ain't your fault it’s there, mind, but it's there all the same. They're workin' on a cure for ya even now. Got some good leads, so I hear! *Haw!* You can trust Dallis to take care of it. And once you're cured, your life will start again.

Sebille - *Ask how he came to be a guard here.*

Magister Hansa - T'were in the time of Lucian, o’ course. Who wouldn't join up with God himself? He was all glory, all goodness. When we lost him... well, it only made sense to see his will through.

Sebille - *Ask him how he can know the will of the Divine.*

Magister Hansa - Can't for certain. But I reckon when God himself gives his life to protect you, you don't *hack!* waste the gift. You protect it with everything you got. So that's what we do.

Sebille - ‘Wonder aloud if the Divine really would have approved of a place like Fort Joy.*

Magister Hansa - Lucian gave his life to protect Rivellon. If we let the Voidwoken get to it now... well, we'd've lost him for nothin'. Fort Joy ain't no summer camp. *Hack!* No one said it were. But it's the best we got to protect the realm.

Ifan Ben-Mezd - [SOLDIER] *Sayyou only wanted to thank the Warder for his sendee.*

Magister Hansa - Proud to serve for the good ’a humankind. Without us, Rivellon's off to the Void in a handbasket. In the crook of a *hack!* Voidwoken's claw!

The Red Prince - [LIZARD] ‘Promise him that for every dead lizard, a dozen Magisters will be slain in retribution.*

Magister Hansa - Ha! Don’t make promises you can't keep, filth! We deal with your disgusting kind very eagerly in Fort Joy. Soon I'll use them pretty claws of yours as toothpicks. He-he-

Magister Hansa - Saw 'em, didn't you? The Hammer and Alexandar. *Hack!* They gave that scaly traitor what-for, they did!

Lohse - *Say you saw it indeed, and it was a gruesome spectacle.*

Magister Hansa - 'Tis a misfortune, sister. *Hack!* You lot can't help your condition, but at least the humans of ya ain't celebratin' the Source plague! 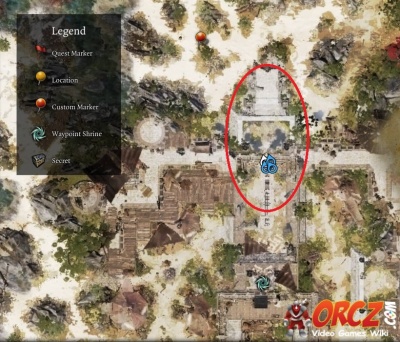