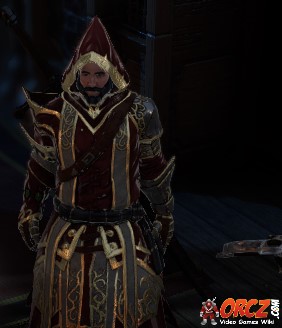 Magister William is an NPC in Divinity: Original Sin 2 (DOS2)

Magister William can be found in the Stern Room on the Lower Deck of the Hold. He can be seen along with Magister Ygritte and Magister Yona, interrogating Windego about the murder.

Narrator — *Standing at the centre of the room you spot a Sourcerer haughtily eyeing a pair of nervous—looking Magisters. They keep their crossbow trained upon her as she's being interrogated by an ofﬁcer.*

Magister William — So you admit it then? You murdered that poor fellow?

Windego - Yes, I did. But of course that was only the beginning...

Narrator — *She turns her head and looks you straight in the eye.*

Windego - There's others here whose lives must end.

Magister William — You there, Sourcerer! Go and fetch Magister Siwan! We need to do more than collar this maniac: we need to shackle her, hands and feet!

Address the Sourcerer and ask her what she meant by "There's others here whose lives must end."*