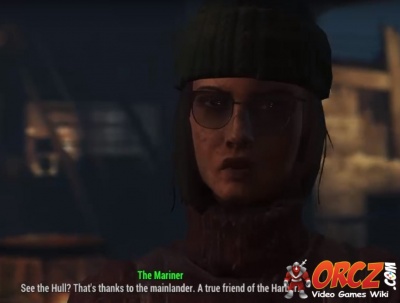 The Mariner in Fallout 4: Far Harbor.

The Mariner is a Human in Fallout 4: Far Harbor

The Mariner was the original inhabitant of what would become Far Harbor. Initially she resented the Fog forcing people to come inhabit the pier. In time though she started to consider them friends. Over the years she came to want to protect the people on the pier and started working on improving the defenses that the pier had.

By helping the Mariner and passing a medium difficulty speech check, she will reveal that she has an incurable illness.

When you complete the Great Hunt, you can either convince her to embellish the story, lie and say they never found it or tell the truth to the Townsfolk.