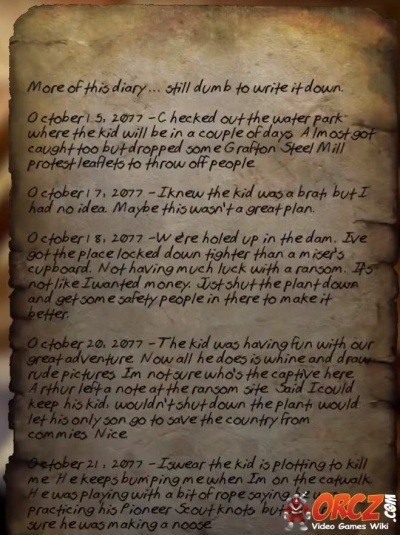 The Diary of Otis Pike is a Item in Fallout 76.

The Diary of Otis Pike is a Notes in Fallout 76.

The diary of Otis Pike found in the Grafton Dam.

More of this diary... still dumb to write it down.

October 15, 2077 - Checked out the water park where the kid will be in a couple days. Almost got caught too but dropped some Grafton Steel Mill protest leaflets to throw off people

October 18, 2077 - We're holed up in the dam. I've got the place locked down tighter than a miser's cupboard. Not having much luck with the random. It's not like I wanted money. Just shut the plan down and get some safety people in there to make it better.

October 20, 2077 - The kid was having fun with our great adventure. Now all he does is whine and draw rude pictures. I'm not sure who's the captive here. Arthur left a note at the ransom site. Said I could keep his kid, wouldn't shut down the plant, would let his only son go to save the country from commies. Nice.

October 21, 2077 - I swear this kid is plotting to kill me. he keeps bumping me when I'm on the catwalk. He was playing with a bit of rope saying he was practicing his Pioneer Scout knots but I'm sure he was making a noose.