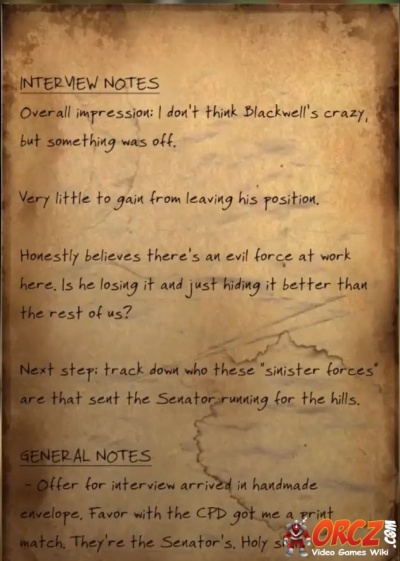 The Sam Blackwell Interview Notes is a Item in Fallout 76.

The Sam Blackwell Interview Notes is a Notes in Fallout 76.

Overall impression: I don't think Blackwell's crazy, but something was off.

Very little to gain from his position.

Honestly believes there's an evil force at work here. Is he losing it and just hiding it better than the rest of us?

Next step: track down who these "sinister forces" are that sent the Senator running for the hills.

Offer for interview arrived in handmade envelope. Favor with the CPD got me a print match. They're the Senator's. Holy shit.

Roughly half-hour hike pretty much due east (could see the sunrise through the bag. Nice thought, though, guys).

Hike passed through the stream, over a highway, small bit of marsh(?) into a cave, then down an elevator.

Rest can be taken from the tapes. Blackwell was in seriously politician mode: on message, firm, and trying his damned to make sure I was scared about the things he claims go bump in the night.