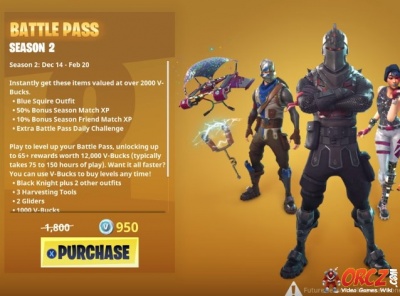 The Battle Pass arrives for Season 2 in Fortnite Battle Royale.

Buy the Battle Pass to get cosmetic loot now. Play to level up your Battle Pass, unlocking 65+ rewards by the end of the season. (typically takes 75 to 150 hours of play to get it all.) Season Two begins on December 14 and ends on February 20.

For a full list of rewards, see: Season 2 Rewards

This is for the premium Battle Pass

You can still unlock rewards from the free path without purchasing the Premium Battle Pass.

Season 2 is starting soon and has all new cosmetic loot. Play for free to get some of these items or buy the Battle Pass to instantly get them, including a medieval themed Squire Outfit.

During the season you play to level up your battle pass, unlocking up to 65+ additional rewards. This can typically take 75 to 150 hours of play). If you want it faster, you can use V-Bucks to buy levels at any time over the course of season 2.

Instantly get these items valued at over 2000 V-Bucks :

Want it all faster? You can use V-Bucks to buy levels any time!

You level up the Battle Pass by getting Battle Stars.

Every 10 Battle Stars advances your Battle Pass Tier by 1.

Battlestars are separate from season experience, although you do get a battlestar every time you level up in the season. You also get Battle Stars by completing Daily Challenges.