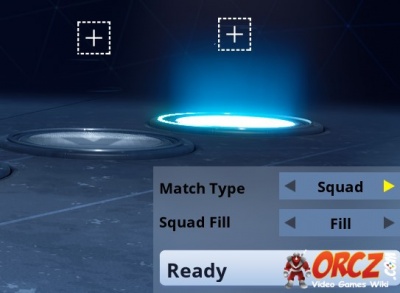 Squad consists of a team of 4 players in Fortnite BR

Squad mode is a Match Type in Fortnite Battle Royale.

The Squad Match Type consists of teams of 4 people.

Lately, I've been playing a lot of Squad games with one of my friends, where we just queue with the 2 of us against full Squads and such.

Whilst doing this, we found that some things generally don't work out as well when you're with only 2 people, but also the things that do work out.

And trust me, it's nowhere near impossible to win with a 2-man squad. So if your other 2 friends can't join, how about hopping into a game with your third friend, with no fill on? This post might just help you with winning one of these.

So, let's jump into the general rules and tactics we use:

• Most importantly, avoid engaging others when unneccesary, especially at start.

•Engaging with a full squad can be devastating if you and your teammate don't have good gear and at least some clear shots that you can fire before they find your location. Especially at the start of the game, don't spawn in the more populated areas, since you're likely to have to engage there.

• Use range as an advantage.

•On close range, no matter how good your gear is, a full squad will take you down 99% of the time. Rather, use range as an advantage. Think of it like this: everyone can hit you on close range with any weapon (except a sniper, maybe). But on good range, they'll have to have at least a sniper or AR with Scope to take you down, which are rare.

•Don't run around both carrying 5 shotguns at a time. The better thing to do here is to make roles. For example: The short range and the long range. The short range is the one who goes in buildings the first, carries shotguns and SMG's rather than AR's and Snipers, and generally is the one who needs shield, while the long range one does the opposite, scouting out enemies when the circle gets smaller, and taking them out from a safe distance.

•Building a huge base attracts attention, and that is the thing you want least when not in a full squad. Rather, use houses or the environment for cover.

• Keep the highground as much as possible.

•Doing this can not only give you a better general overview of the battlefield, but also provide cover and a good hiding place, as well as giving opportunities to take down unsuspecting enemies with a Sniper or AR.

These were some basic "rules" we use each time. And because we are now doing this for a while, these tasks/tactics have automated. Of course, a full squad will be better most of the time, and I do recommend playing with a full squad if possible. If you just want a fun time with one of your friends, definitely try this out.