Gravity Wars is a turn-based artillery game for the Amiga and PC originally written by Ed Bartz in 1987. Unlike the first artillery games, Gravity Wars has 2D gravity from planets. The game consists of two spaceships firing projectiles at each other using an angle and velocity. Randomly scattered planets across a 2D system gravitationally attracting the projectiles make shots tricky, with the shots describing chaotic paths. The player's enjoyment is derived from the skill required to achieve a successful hit and the surprising orbits resulting from shots that can result in unexpected own goals. With its simplicity and aesthetic beauty it inspired re-makes with the same name. 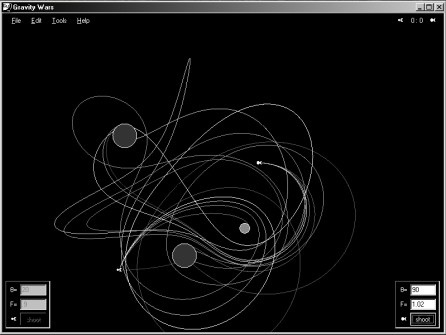