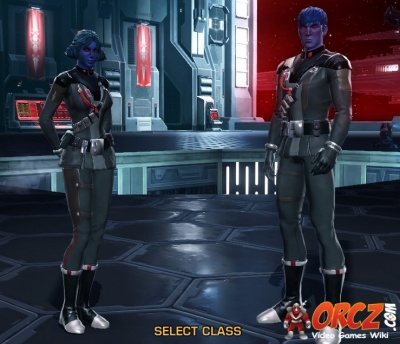 "Imperial Agent" is a class in Star Wars: The Old Republic.

Behind every Imperial surprise attack, each sabotage, all the great betrayals, was an Imperial Agent. Armed for stealth and assassination, Agents do the jobs nobody else can and as such are trained to use everything from sleeping darts to sniper rifles, stealth belts and knives to advanced probe droids.

The Empire risks everything on the Imperial Agent's performance and spares no expense to make sure Agents' gear is as smart as they are. State-of-the-art attire with high-grade armor mesh provides protection and ease of movement. Many of the Agent's outfits are augmented with advanced communications technology and attachments to facilitate interfacing with varied computer networks and security systems.

The Imperial Agent is an unparalleled marksman with a rifle, but can also utilize a number of high-tech weapons to assist in combat. Agents use several types of grenades, poisons and acids, offensive and defensive probe droids, energy blades, and may even call in help from Imperial forces orbiting the planet to destroy tough enemies.

Agents who specialize as Snipers upgrade to the longer range Sniper Rifle, and will utilize both environmental cover and their portable cover generator to avoid enemy fire.

Agents who become Operatives learn to better utilize their close-range energy blade, and use their personal stealth generator to sneak behind enemies and gut them with blade attacks. Some Operatives may use Imperial medical technology to keep their allies healed.

The Imperial Agent has the following specializations:

Relying on range, surprise and an arsenal of state-of-the-art gadgets and weaponry, the Imperial Agent enters battle with a confident strategy. Though striking from a distance or from the shadows plays to the Agent's strengths, well-equipped operatives are more than capable of evading their enemies when necessary or moving in close to quietly slide a blade between an opponent's ribs. Whether on a solo mission or working in conjunction with a strike team, this operative keeps a finger on the right button for almost any situation.