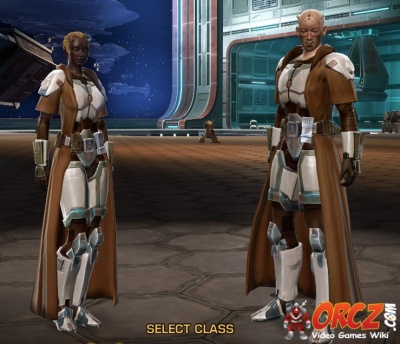 "Jedi Knight" is a class in Star Wars: The Old Republic.

Leaders and warriors, heroes and champions, the Jedl Knights have stood at the forefront of every battle. They are masters of the lightsaber arts, kicking, jumping and flashing through the air and using the Force to clear the way in front of them.

The galaxy has been plagued by war for decades, and despite the Treaty of Coruscant, the Jedi have no delusions about the constant danger. Though traditional Jedi robes range from light cloth to thick leathers, many Jedi Knights also wear parts or entire suits of heavy armor when going into battle.

The Jedi Knight is a master of lightsaber combat. The Knight's abilities focus on the use of single and dual lightsabers both as devastating offensive weapons, and powerful protective implements. The Knight occasionally uses Force powers in addition to his close range saber attacks, though not as much as the Jedi Consular.

Knights who become Jedi Guardians will continue to specialize in single saber combat, and may learn defensive lightsaber forms to help shield themselves and allies from incoming attacks.

Knights who become Jedi Sentinels become versed in combat with two lightsabers. and learn powerful attacks that utilize both weapons.

The Jedi Knight has the following specializations:

Whether defending allies by deflecting a barrage of blaster fire or charging in to challenge a Sith Lord, the Knight's role is crucial in any conflict. The Jedi Knight enjoys the benefit of ancient teachings that have been passed down through hundreds of generations. Combining these time-tested maneuvers with the natural guidance of the Force, the Knight is capable of achieving extraordinary feats.