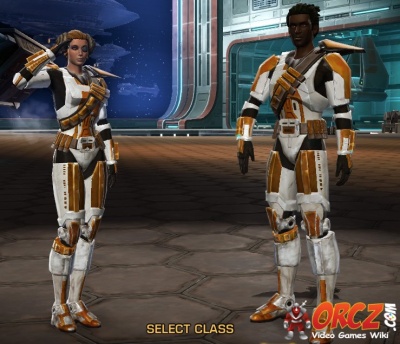 "Trooper" is a class in Star Wars: The Old Republic.

Across the galaxy, the Republic's elite Special Forces'drop into the harshest conflicts ready to do maximum damage. Outfitted with advanced armor, huge weaponry and the best training possible, Troopers combine leadership with suppression fire, a variety of explosives and incendiary weapons.

The Republic's experiments with a new generation of heavy blaster rifles have proven successful, sparking a galaxy-wide trend towards larger, more powerful and more versatile armaments. It takes a great deal of strength and training, however, to wield these war machines, so they're rarely used outside the military. Republic engineers have also worked overtime fashioning new defensive gear for the Republic's most elite soldiers, armor suits that provide maximum protection and flexibility in multiple environments.

The Trooper is a heavy weapons expert. All Troopers are skilled in the use of blaster rifles, as well as powerful grenade launchers capable of firing explosive rounds and volleys of incendiary mortars. Their rifles can be loaded with many types of ammunition, allowing the Trooper to tailor his gun's performance for the needs of any battle.

The Trooper has the following specializations:

Whether fighting as part of a small strike squad or at the forefront of a larger force. Troopers can unleash unrivaled firepower against their enemies. A rifle is a Trooper’s best friend, and the military is constantly challenged to design faster, more powerful and more reliable blaster rifles every year. Wielding such rifles and wearing protective battle armor designed by the Republic's top engineers, the Trooper will not hesitate to step right into the cross fire. Whether storming a base or a battlefield, the Trooper charges into the fight, blaster-rifle blazing, to clear a path for freedom and justice.