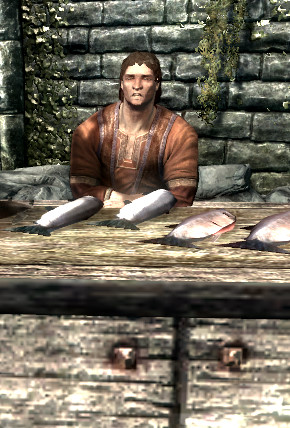 Addvar behind his stall in the Solitude Market in Skyrim

Addvar is a male Nord NPC in Skyrim. He sells food and ingredients in the Solitude market.

Addvar can be found during the day behind the stall in the market. At night he is in Addvar's House in Solitude.

When you first enter Solitude though, he will be near the gate witnessing Roggvir's Execution

Addvar is a merchant, and operates a stall which sells mostly food, but some ingredients

Addvar is sometimes involved in the Thieves Guild Burglary quest, Hired Muscle, where you have to retrieve a Golden Ship Model from his house.

You can ask Addvar about where he gets his fish (down at the docks, if you can avoid the East Empire Company workers)

You can also talk about an execution that he and his daughter Svari witnessed, of Svarri's uncle, Roggvir

Addvar carries a Cage Key (Could be bugged. Should probably have carried Addvar's House Key instead)