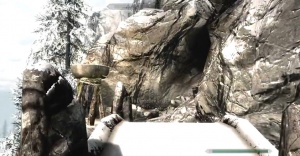 The Entrance to Dimhollow Crypt in Skyrim Dawnguard

Awakening is a main story quest in Skyrim: Dawnguard.

Awakening is given by Isran, the leader of the Dawnguards.

I've met Isran, the leader of a group of vampire hunters known as the Dawnguard. The vampires that attacked the Hall of the Vigilants may have been after something in a place called Dimhollow Crypt. Isran has asked me to find what the vampires are looking for.

Find out what the vampires are seeking

Speak to the mysterious woman.

Kill the enemy vampires inside

Dawnguard, where you learn about the vampire hunters and travel to Fort Dawnguard

Bloodline, where you escort Serana to Castle Volkihar and then refuse Lord Harkon's gift of blood (which would have made you into a Vampire Lord