Skyrim: Glory of the Dead 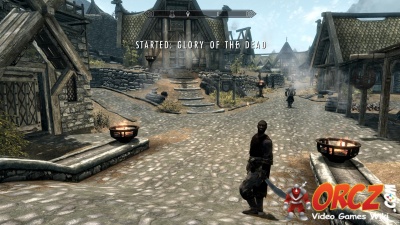 Glory of the Dead in The Elder Scrolls V: Skyrim. 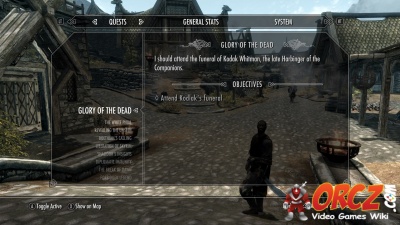 Glory of the Dead in The Elder Scrolls V: Skyrim.

“Glory of the Dead” is a Companion Faction Quest in The Elder Scrolls V: Skyrim 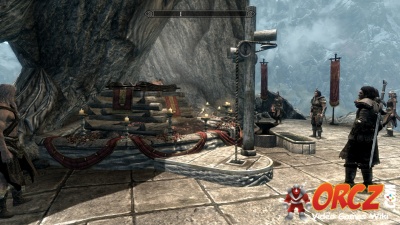 When you arrive in Whiterun Vilkas will head off toward Jorrvaskr. He will explain that everyone is there and likely ready to begin the funeral of Kodlak Whitemane. Follow him over there. He will head over to the Skyforge. They have set up a pyre for the deceased Harbinger. Just watch the proceedings. 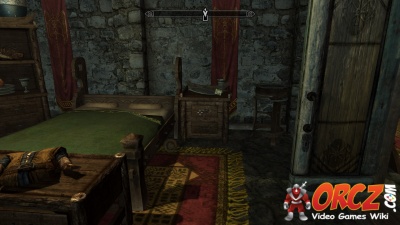 When the funeral is done and the Circle has been called to the Underforge, Eorlund Gray-Mane will ask a favor of the Dragonborn. He wants you to give him the Fragments of Wuuthrad that you collected. After that, he will ask you to collect the final fragment that Kodlak Whitemane kept in his room. Head inside Jorrvaskr and then down into the Living Quarters. Go to the end of the hallway. Go to the room on the right. Look to the right of the bed. You will find a endtable. Look inside it to find the final Fragment of Wuuthrad and Kodlak's Journal. Read the journal to get an idea of what was going on with Kodlak. After that, return to the Skyforge and Eorlund Gray-Mane. He will take the fragment from you and then tell you to head to the Underforge. 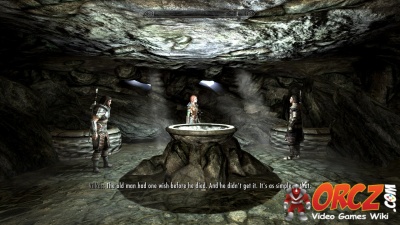 In the the Underforge you will find the remaining Circle Members talking about the fate of their former Harbinger. They will want to honor the final wish of Kodlak and help cleanse the Wolf from his soul. But to do this, they will need Wuuthrad which has been broken for over a thousand years. As they lament this, Eorlund Gray-Mane walks with in the reforged Wuuthrad. He will present it to the Dragonborn and they will all agree it is time to head to Ysgramor's Tomb to aid their fallen Harbinger's Soul. 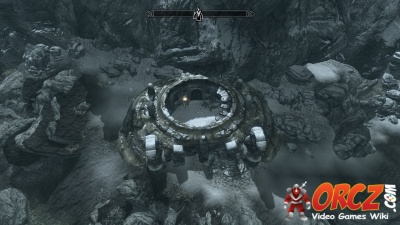 Ysgramor's Tomb is found to the West of Winterhold. Fast Travel there and then make your way to the island with the tomb.

Approach the island from the Southeast. This will give direct access to the Tomb itself. Just head down the stairs and go inside the tomb from there. There you will find the Circle waiting for you. Vilkas will start talking with you. Through this conversation you will learn just what is coming ahead of you. He will explain to get inside the tomb itself you must return Wuuthrad to Ysgramor. 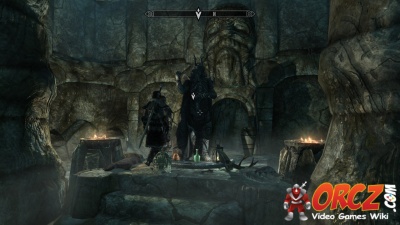 Approach the statue in front of you. You must give it Wuuthrad to open the passage into the tomb itself. You can immediately take it back to continue using the weapon (but it will have weight now). This will reveal a passage leading to the North. Head through it and start going through the webbing. Aela and Farkas will accompany you through the webbing. As you go through the webbing, expect to encounter a few Skeevers that will come after you. Head around the corner to the West and go into the crypt. 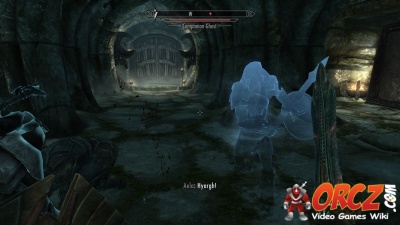 This first crypt will have you encounter 2 Companion Ghosts. They will come after you with whatever weapons they used in life. They can still be hurt, apparently, by mortal weaponry. This is the first of many tests you will encounter. Defeat them then check over the room. You will find some Nord Weapons on the various tables. When you are ready to move forward, head through the door to the West. 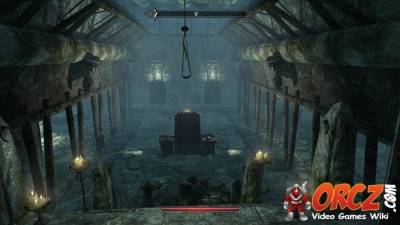 This chamber has 3 Companion Ghosts that you will need to deal with. Back up if they threaten to overwhelm your party. Search around the room to find anything more gold. When you are ready to move forward, head down the stairs to the South. 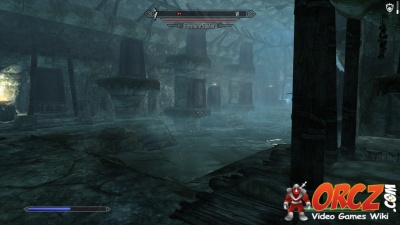 This leads to another large crypt. This one will have another 4 Companion Ghosts that you will need to deal with. Take your time to fight through them. Work with your team but be sure to mind where you swing so you don't hit them. 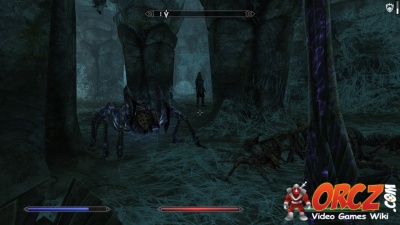 Head over to the West and head through the opening in the wooden wall. You will see some Webbing to the South. Attempt to go forward and one of the Companions will stop you. Farkas will admit to developing a fear of spiders after what happened at Dustman's Cairn. he will head back to the statue room to be with his brother. Now it is just you and Aela. Start slicing your way through the webbing and deal with the Frostbite Spiders that come after you. 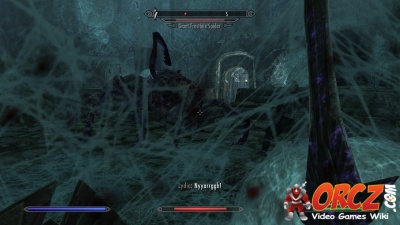 Continue to the East. This will lead to another chamber. This one has a pair of Frostbite Spiders and one Giant Frostbite Spider that will come down from the ceiling. Defeat all of them. You need to raise the Southern gate blocking your way forward now. Look to the left of the gate. Pull the chain there to raise it. Head on down the stairs after that. 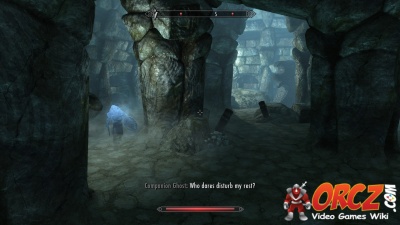 There are another 3 Companion Ghosts to deal with. Take some time to search around the room. You can find a Apothecary Satchel, some more Nord Weapons and at least one healing potion. After your search, turn to the East. Go down the ramp to move forward. 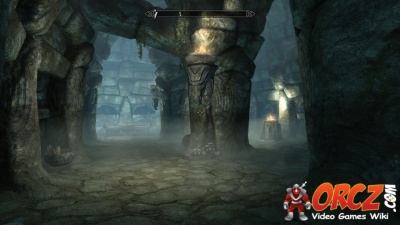 This will lead to another medium sized crypt. Here you will find 4 more Companion Ghosts waiting for you. Defeat them and head to the far end of the crypt. Search the tables with the Draugr for some potions and Iron Armor pieces. Turn to the East after that and go up the stairs to the next chamber. 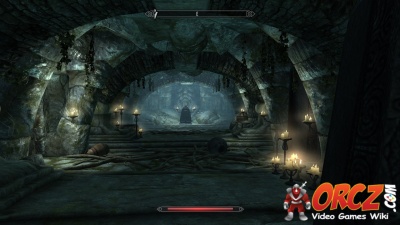 Head to the far eastern side of this chamber. If you look to the North as you reach the middle, you will see a gate blocking your way. The switch to raise it is at the Eastern end of this chamber. Activate the handle and then return to the middle of the chamber go through the Northern doorway. 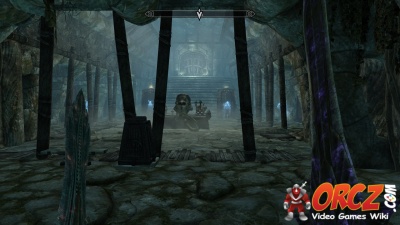 This chamber has 4 Companion Ghosts that you need to fight your way through. Take your time dealing with all the foes because of their number. If you are a decent archer, some sniping is recommended.

After you defeat them, investigate the table in the middle. This table has a number of Burial Urns that you can loot. You can also find the Two-Handed skill book: The Legendary Sancre Tor. When you are ready, heal up and head up the stairs to the North. The Burial Chamber with the Harbinger's souls is just ahead. 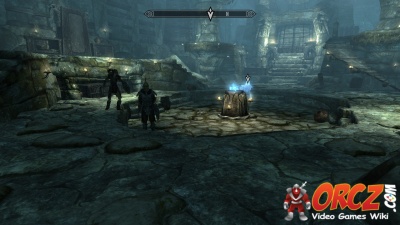 Move into the center of the room. The Ghost of Kodlak Whitemane will appear in front of the Flame of the Harbinger. He will explain that if you feed one of the Glenmoril Witch Heads that you collected into the flames it should release the magic that will free him of his beast blood. 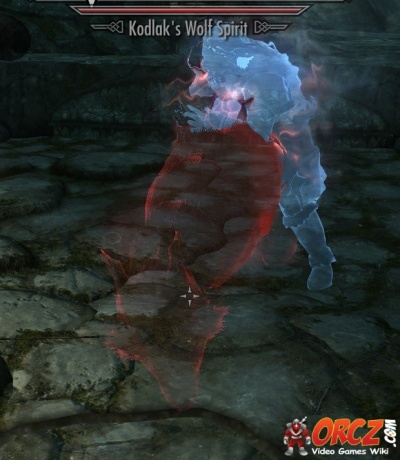 After you put the head into the Flame of the Harbinger, then Kodlak will stumble some. From him will emerge Kodlak's Wolf Spirit. All your allies will immediately attack the spirit. It is very easy to defeat with all the aid. Just attack it. It will go down before long.

When you have defeated it, head over to Kodlak Whitemane.

Search the room. You can find some Ancient Nord Armor around here with some Iron Weaponry scattered around on the tables.

Now, head over to the Northeastern corner of the room. Climb up the stairs and look ahead of you. You will spot a chest before you get to the gate that will lead back to the entrance of the area. Open the chest to see what is inside. You will find the Shield of Ysgramor. You can also find soem valuable loot inside it. After that, use the chain to open the passage. Follow it up the stairs. From there, continue forward. Open the hidden door with the next chain. This will lead you back to the chamber with the statue. Talk with Vilkas and Farkas. Continue on through to the West. This passage is open now. This will lead to the Word Wall for Animal Allegiance. Just follow it to the top of the mountain that this tomb is located in. After that you can just head back to Jorrvaskr. You are now the leader of the Companions.