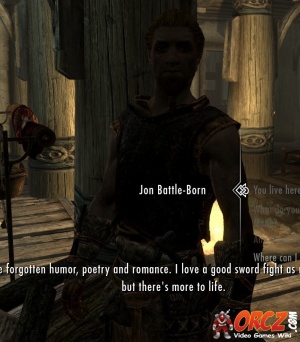 Jon Battle-Born is a Nord NPC in The Elder Scrolls V: Skyrim.

Jon Battle-Born is an aspiring Bard. He wishes to go to the Bards College but his parents are hesitant to let him enter into it. He is very different in that he is not obsessed with battle and is more interested in creating (he still enjoys fighting). He has a degree of skill as a musician and takes it fairly seriously.

Jon is romantically involved with Olfina Gray-Mane. They hide their relationship because of the feud between their clans.