Rescue from Fort Neugrad in The Elder Scrolls V: Skyrim.

“Rescue from Fort Neugrad” is a Stormcloak Faction Quest in The Elder Scrolls V: Skyrim

Meet the men near Fort Neugrad[edit]

Fast Travel to Helgen. Your destination is a bit to the South from there.

Make your way to the marked location. You will find Ralof with a number of Stormcloak Scouts.

Head to the Southeast and keep against the rock face on your right. Do not cast spells (unless they are silenced) until you are inside the tunnel.

Inside the cave, head to the North out of the water. Follow the corridor up to the prison itself.

Inside this prison you will find a number of Prisoner Stormcloaks. There is an Imperial Soldier watching over the prisoners. Sneak up on him and take him out. Search the soldiers you take down Fort Neugrad Prison Key. Most of the prison gates are Novice Level. Either pick the locks or loot the guards' bodies to get the key. Remember, once you start fighting, Ralof will come running inside.

Head out of the prison into the courtyard of the fort using the Western stairs. This will take you to the next landing. Go through the door to the West, past the hearth.

Outside, head into the fray and start attacking the Imperial Soldiers. Clear out the courtyard. After that, you have one more section of the fort to clear to secure it.

Head for the main entrance to the fort itself. There are 2 large pillars just in front of it to make it easier to spot.

Inside you have another set of Imperial Soldiers to go through here. Start with the guard in the entry way. After that, look to either side and use the Wooden Door to get access to the stairs that will lead you upwards. Head to the West and go up the stairs. Turn to the East and look for the next Southern door. Open it up to unleash more Soldiers that are after you. Clear them out and then continue to the East through the hallway.

The Southeastern room has the Fort Commander. You will need to defeat him to finish taking over the fort. After that, you will need to hunt down any survives and kill them. 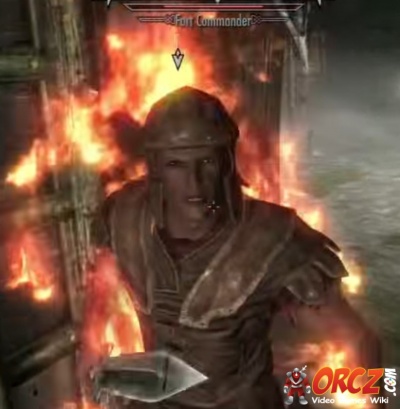 Head outside the main portion of the Keep or just find Ralof. Talk with him and he will tell you to report up the chain of command. This will complete the quest. Turn to Windhelm and report to Ulfric Stormcloak to trigger the next quest.