Having join the Bards College you will be able to find and talk with Giraud Gemane. He will tell you about Rjorn's Drum which was lost long ago. He will explain that he has figured out the missing link in Rjorn's life and where he likely died. This has led him to believe that the Drum is inside Halldir's Cairn. He will send you there to hunt down the Drum.

Halldir's Cairn is a cave located somewhat nearby Falkreath.

Head inside the Cairn when you arrive. You will find a strange pile of stones emitting a beam of light just off from the center of the first room. Head down toward it. Around the Cairn itself you will find the dead bandits, Raen, Agrius and Vidgrod. Head to the South from the glowing cairn. You will find a pedestal with Agrius's Journal and Key to Halldir's Crypt. With those items in hand, go through the door to the South.

Take the stairs through the door upwards. There are a few items to the East at the top of the stairs. To the South is a short passage leading to a small pond. To the West is a locked door (Adept level). As you approach this door you will be attacked by 2 Ghosts. You can open the door with the Crypt Key, so go on through.

On the other side of the door is another pair of Ghosts. Defeat them and follow the passage to the North. The passage will turn around to the South and you will see a Spiked Wall trap. Be mindful of it and its trigger in the middle of the floor in front of you. Jump over it and continue around the corner. You will find a few more Ghosts to deal with. Defeat them and head up the stairs to the North. Be careful because there is a Draugr resting in the nooks in the wall behind you. Ambush it or just ignore it and head up the stairs to get some distance and then take it out.

At the top you will find a Draugr Wight waiting in ambush on a stone chair. There is another Draugr to the left of the top of the stairs.

Go behind the chair and look at its base. You will find a lever. Pull the lever to open the gate ahead of you. Turn to the right at the chair to continue forward. Go through the now open gate there. Follow the stairs up to the North. Turn to the East after that.

To move forward now, you need to solve the Cairn Stone Pillar Puzzle then pull the marked lever. If you pull the lever before, then you will be assaulted by poison darts and attacked by a number of ghosts. When the puzzle is solved, head to the North through the now open door.

Follow the corridor as it winds it way to the next chamber. Enter it and you will see 2 Ghosts appear and attack you. Defeat them then turn to the South and head up the short staircase. Follow the corridor to the East to reach the next large chamber.

This is where you will fight Halldir. This is a fight with a few phases to it. The first phase has you just attack Halldir himself. When you have done about 1/3 of his health, he will become invulnerable and vanish in the middle of the room.

Halldir splits into 3 different Draugr of the same name with different elemental types (Fire, Ice, Shock). Each will need to be defeated for the fight to progress. 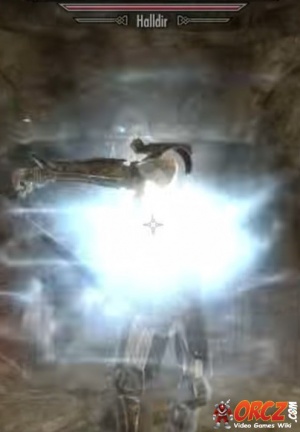 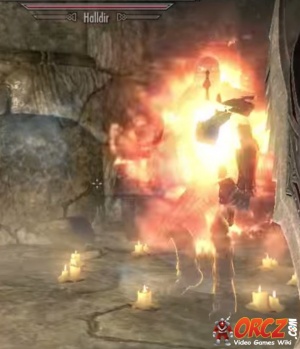 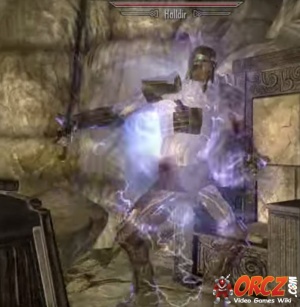 You are best off confronting each of the elementals individually..When the elemental forms are defeated, he will become a Ghost. This is his final form. Defeat him and you are free to collect Rjorn's Drum. Be sure to collect his staff, which is very useful.

To get back out, head to the middle of the room. Go to either side of the grating. It is a trap door. Open it up to find a few ledges that will let you safely drop down to the ground around the cairn in the entrance of this dungeon.

Head on back to Solitude. Go and talk with Giraud Gemane back in the Bards College. He will reward you with a +1 to Block, Archery, One-Handed and Heavy Armor