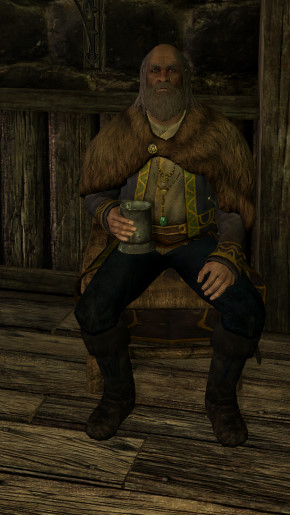 Vulwulf Snow-Shod, a wealthy NPC in Skyrim, sitting and having a drink in his manor in Riften

Vulwulf Snow-Shod lives in the Snow-Shod Manor in Riften. He can be found there during the evenings and nights. When he is not in his manor, he can often be seen in The Bee and Barb

He is married to Nura Snow-Shod, a priestess in the temple in Riften

Vulwulf owns the Snow-Shod Farm southwest of Riften. He lets Addvild handle the farm. Vulwulf used to be a Stormcloak soldier.

Vulwulf Snow-Shod is sometimes involved in the Companions Radiant quest, Hired Muscle, where you have to intimidate him. Intimidate Vulwulf by brawling with him.

Vulwulf tells you about the death of his daughter, Lilija, who was slaughtered by the Imperials. For this reason he hates Imperials and supports the Stormcloaks. If your character is an Imperial he will send swears your way.