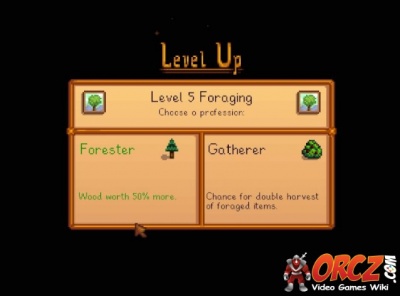 There are five different skill categories in Stardew Valley. By leveling up a skill, tools proficiency is increased and crafting recipes are unlocked. At level 5 the player is given a choice between 2 professions with unique perks. At level 10 there is another choice related with the profession selected at level 5. These choices always take place after the player goes to sleep.

Each level adds +1 proficiency to the hoe and watering can. Experience is earned by harvesting crops (crops harvested by scythe do not count) and caring for animals. The type and quality of crop harvested determines the amount of experience gained.

Each level adds +1 axe proficiency. Experience is earned by gathering foraged goods and chopping wood with the axe.

Each level adds +1 fishing rod proficiency. Experience is earned by successfully catching fish and collecting items from crab pots. The amount of experience gained depends on the type and quality of fish catch as well as whether a perfect catch was achieved.

Each level adds +5 health points, except at level 5 and 10. Experience is earned by killing monsters. The amount of experience earned from a kill depends on the type of monster killed.

Credit for these tips goes to /u/greyhoundknight

Farming - Personally, I am not a fan of animals aside from what is needed for the community bundles and for recipes like Pepper Poppers. As such this perk ends up being all about the money to me: Tiller at level 5 for a 10% value to my cash crops then Artisan at level 10 for a 40% gold to my massive wineries. If/when I explore a ranch playthrough then the Rancher side of the professions makes more sense. Combining the Rancher with Botanist could be lucrative if you want a truffle empire (not truffle oil empire though). My standard choice: Tiller > Artisan

Miner - I don’t think there is a clear winner in this category. Miner is nice because it increases ore yields by at least 33% which is great for iridium and other ores. After that, I choose Blacksmith because I might think about smelting bars and by the time I hit level 10 I just buy coal if I need it. Geologist is geared towards active mining in my opinion. It can have some nice money perks but to me its worth depends on the player continuing to mine for large amount of gems and minerals. In my playthroughs I have mined for ore, not gems/minerals. My standard choice: Miner > Blacksmith

Foraging - I have a hard time justifying Forester unless you plan on having large tapper groves. There is lots of space for this on the standard farm, the quarry, the train station, and the desert. Just not my cup of tea. Tracker is nice for finding artifact worms, however I think Botanist clearly blows it out of the water if you are interested in truffle farming or growing winter seeds. My standard choice: Gatherer > Botanist

Fishing - There are 2 important questions for these choices: How much do I like fishing? How important is the museum collection. If you like fishing, then Fisher > Angler seems to be the way to go. If a complete museum collection is important, then I would choose the Pirate instead. If you don’t like fishing, then choose Trapper. The choice between Mariner and Luremaster is whether you care about having to buy/craft bait. My trick for Mariner is to place a chests with for holding bait near the crab pots, then buying large amount from Willy. My standard choice: Trapper > Mariner unless I want a complete museum then it’s Fisher > Pirate

Combat - The safest choice is Fighter > Brute because it a guaranteed 25% damage bonus every hit. While Defender adds the equivalent of an additional enemy attack, the stack of food I carry in the mines doesn’t make it worth it to me. With the Scout profession it is important to read that critical strike chance is increased by 50% not to 50%. If it was the later, then Scout > Desperado would clearly be the best. But the increase is by 50% so I don’t see this tree being valuable unless you really enjoy special moves. My standard choice: Fighter > Brute