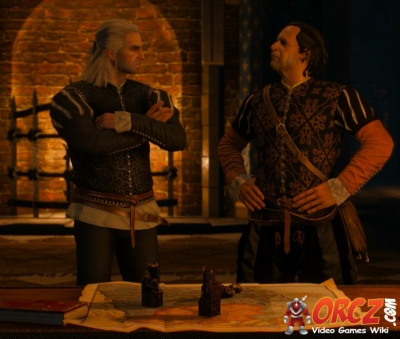 Ambassador var Attre gives an update to Geralt of the current situation in the war between the Nilfgaardian Empire and the Northern Kingdoms in The Witcher 3: Wild Hunt.

This conversation between Geralt and the Ambassador takes place in the Royal Library of the castle.

The Ambassador uses a map to help show the locations he is talking about.

Geralt: Ambassador var Attre? Yennefer suggested I ask you about current events. The war, and so on.

Ambassador: Of course. The emperor's servants should keep no secrets from each other. If you will, let us approach the map.

Geralt: How is the war going? I mean, apart from the fact that Nilfgaard's triumph is imminent.

Ambassador: I assume this to be a private conversation. We've no witnesses, so let's dispense with propaganda, even that shrouded in irony. Our offensive was going splendidly - until winter came. Aedirn was in such disarray that we encountered no resistance. We had reached the Pontar before the first snows. Only a weakened Kaedwen remained... And Radovid's Redania, which had ignored the rest of the North's pleas for help. we thought they'd sue for peace, perhaps even submit to vassalization. We waited for spring, certain of victory.

Ambassador: Yes, a vain hope, I agree. Radovid sent no peace envoys, nor did he advance on our positions. Instead, he trudged over the snow-bound kestrel mountains, and attacked Kaedwen, his ally. This attack took the Kaedweni by surprise. They were still mourning the loss of their king. Rudderless and dejected, they laid down their arms after a few lost skirmishes, and joined Radovid. And so by spring, instead of two weak enemies we had only one powerful one.

Geralt: That admiration I hear in your voice?

Ambassador: Radovid is our foe.. but I can't deny he is clever. He played us for fools, particularly dense ones at that. Returning to the war... this spring there was a massie battle in the marshes of Velen. Massive, yet indecisive. Both sides suffered enormous losses. Unprecedented, even. Radovid has retreated across the Pontar. He's safe for now... until reinforcement arrive from the south. Then Emperor Emhyr var Emreis will deal with him once and for all.

Ambassador: Kovir values its neutrality. Enough not to lend its armies, or, more importantly, even its coin to either side.

Geralt: Couldn't you just go home? Save everyone a lot of marching, not to mention a few human lives.

Ambassador: I'm afraid the stakes are too high to fold now. We can only go all in.

Geralt: Hm... how do things look in Velen?

Ambassador: As bad as ever... perhaps worse. This land never flowed with milk and honey, and now it flows with blood. Armies have swept through it several times, trampling fields, looting granaries, burning villages. Famine grips the populace.

Geralt: Mhm. So how's ruling that earthly paradise going for you?

Ambassador: Not well, to be honest. Our forces are spread thin as it is, and Velen is chiefly swampy forests that are difficult to control. We've had several patrols never return to their camps. Thus, we've temporarily delegated authority in this region to a certain Nordling, a former low ranking officer in the Temerian army, one Phillip Strenger. Better known by his nom de guerre, the Bloody Baron. I advise you well - avoid him.

Geralt: Any news from Novigrad? Is the free city still free?

Ambassador: Yes, although everyone knows this won't last. Radovid is in Oxenfurt, and the emperor is here, in Vizima. At Novigrad's doorstep, both. And both require coin and ships. Novigrad can provide these. Which is why the mood in tho city is rather... well, on edge.

Ambassador: How do men deal with fear? They seek reassurance... and scapegoats. The Church of the Eternal Fire understands this perfectly. And so it promises to improve the lives of its flock by pointing out the guilty. Who started the war? Who profits from it? Why, it's obvious mages, elves, dwarves. In a word, any and all deviants. I've been stationed in Novigrad for thirteen years. First as a consul, then as ambassador. I've seen a great deal cruelty, cynicism, greed. But what is happening there now concerns me greatly.

Ambassador: Nothing. The islanders pride themselves on that, don't they? Doing everything according to tradition? As their forefathers did. And like their forefathers, they quarrel with each other, pillage, occasionally attack our transports. This is cumbersome... but nothing more. Skellige has always been a footnote to history. And so it shall remain.

Geralt: Sound awfully confident. What if King Bran manages to unite the jarls? Lead all the clans against your fleet?

Ambassador: King Bran is a feeble old man. From what I know he barely remembers the names of his own vassals. Uniting all might prove difficult.

Geralt: Thanks for your help.

Ambassador: Think nothing of it. May the great sun light your path.