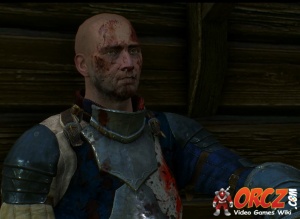 Bastien from the Witcher 3 Wild Hunt

Bastien is an NPC in The Witcher 3: Wild Hunt.

Bastien is a Soldier

He is the brother of Dune Vildenvert

Bastien got recruited to the army of the Northern Kingdoms, along with some other recruits from White Orchard, to fight against the Nilfgaardian invasion.

After a brutal fight at a Battlefield near the Crossroads, Bastien was declared MIA

His brother, Dune, still looks for him, hoping he is still alive.

It is later revealed that Bastien did not die in the battle, but rather deserted along with a Nilfgaardian soldier name Rhosyn, and they both hid in a Cabin near the Battlefield

Dune Vildenvert recruits Geralt to help him look for Bastien.

When you locate Bastien in the Overgrown Cabin, Bastien asks Dune to also help hide Rhosyn who deserted from the Nilfgaardian Army

Later, Bastien, Dune, and Rhosyn (if you agree that he should be saved) move to a Farm near the Village of White Orchard

Depending on which stage you are in the quest, Missing in Action, Bastien can be found in one of the following locations: