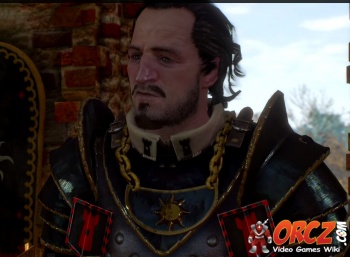 Captain Peter Saar Gwynleve is a character in The Witcher 3: Wild Hunt.

He is the commander of the Nilfgaardian Garrison in White Orchard

He can be found at the tower of the Garrison.

Geralt goes to meet him to seek information about Yennefer in the quest, Lilac and Gooseberries

Captain Peter agrees to give the information but only if Geralt will take care of a Griffin that's been causing problems in the area.

This begins another quest, called "The Beast of White Orchard" 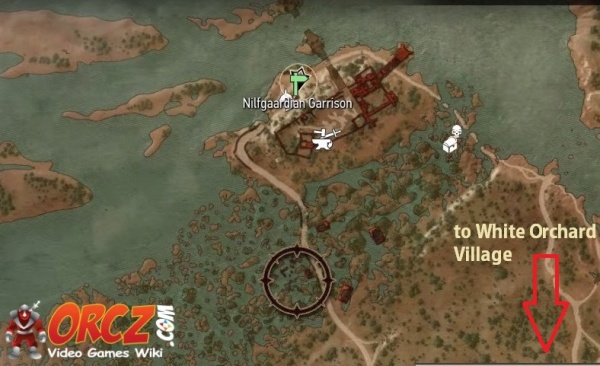 Captain Peter: I summoned only the Ealdorman and the smith, Willis - but it is said he is a Dwarf. You are too tall to be him.

Geralt: Plan to requisition something from him, too?

Captain Peter: It is necessary. Yes of course, we are at War, in case you have not noticed. Who are you? Speak.

Captain Peter: A vatt'ghern - this explains why I did not hear your footsteps. What do you seek here?

Geralt: Yennefer of Vengerberg. Where was she headed?

Captain Peter: That is a military secret.

Geralt: Haven't thrown me out yet. Haven't called the guards. So go ahead - what's your price?

Captain Peter: There is a Griffin in the area. Slay it, and then I shall see what I can do.

Geralt: Why do you care about this Griffin?

Captain Peter: Because I care about people. The beast has killed ten already. Including a few of my men. To hunt it, I would need to mobilize the entire garrison, comb the woods, organize a battue. Simply impossible.

Geralt: Too big a hassle?

Captain Peter: No. Too high a risk. I cannot dispers my forces. Temeria's army we have crushed, but its common folk remain, ready to answer a call to arms. So as to this Griffin, I can sit on my hands, or hire a professional.

Geralt: It's a deal. Some questions before I start. Know where the Griffin has its lair?

Captain Peter: It kept to the Vulpine Woods at first. I sent a patrol there, fuve young men. A hunter found them two days on. I only recognized them because they wore our plate. Since then, the Griffin has grown bold. Attacks in villages, fields, on the main road.

Geralt: Meaning it's abandoned its lair. Gonna have to set a trap.

Captain Peter: I judge from your tone this will not be easy. What will you require?

Geralt: Need more information about this griffin. Its sex, why it's abandoned its lair.

Captain Peter: Shall I bring you witnesses?

Geralt: They won't say anything I don't already know. I need to go where your men died, look around. What's the name of the hunter who found them?

Captain Peter: Mislav. He has a hut south of the Village, very near the wood. Helpful fellow. A little strange, though.

Captain Peter: Buck... buckthorn? I do not know of this. But I am not yet fluent in the common tongue.

Geralt: Mhm. Probably mastered the basics though, "hands up", "kill them"...

Captain Peter: No. First came idioms. "Don't play with fire," for example. Go to Tomira, a herbalist. She lives near the Crossroads, She will aid you.

Geralt: Tomira and Mislav... thanks.

Captain Peter: Good hunting to you.