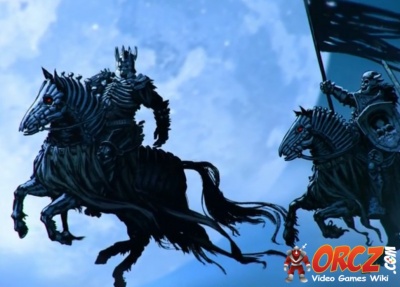 From an intro scene shown at the start of The Witcher 3: Wild Hunt.

"I see you gather here before me... hungry... terrified... Clutching your babes to your breast. Emperor Emhyr has marched his legions into our lands... laid siege to every fortress from here to the Blue Mountains... Rabid and ravenous, he bites and bites away.

Men of the North, you stand at the precipice! Your kings have failed you, so now you turn to the gods! And yet you do not plead? You do not kneel to dust your heads with ash? Instead you wail, "Why have the gods forsaken us?" We must look into the trials we failed long ago! In a time past, our world intertwined with another through an upheaval scholars call the Conjunction of the Spheres...

The gods allowed unholy forces to slip into our domain. The offspring of that cataclysm was the nefarious force called magic... Yet we did not banish it, instead studying the vile arcane for our own power and wealth! And the monsters at our door... the unholy relicts of this Conjunction? the trolls... the Corpse Eaters... The Werewolves... Did we raise our swords against them? Or have we laid this burden on others?

On so-called Witchers... stray children taught the ways of foul sorcery, their bodies mutated through blasphemous ritual. Sent to fight monsters though they could not distinguish good from evil. The flicker of humanity long extinguished within them.

Yes, their numbers have dwindled through the years. But a few still roan our lands, offering their bloody work for coin. To this day they shame us with their very existence!

The North bleeds, flogged by war. The battles are the gods' whip, chastisement for our sins! And let us not forget the terrors, the scourges from beyond our world. The Wild Hunt rides the sky with every full moon! The dark raiders abduct our children into lands unknown! Some say they herald a second conjunction! Can we chart a course back into the light? Will we find the strength to banish the mages from our kingdoms? Unite around the warmth of the Eternal Fire?

Nigh is the Time of the Sword and Axe! None will fight this war in our stead! Nigh is the time of madness and disdain!