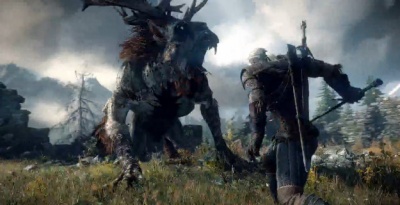 A Fiend in The Witcher 3: Wild Hunt

One of the Epic enemies in The Witcher 3: Wild Hunt.

It looks like a massive jackelope crossed with a vicious beast.

The Fiend has psychic powers that it can use to hypnotize Geralt, effectively blinding him in a dark shroud and hiding the Fiend from view. The Fiend can use this to run away and hide, or to get a few cheap hits in.

Geralt can counter the hypnotism by focusing his magic on the Fiend and breaking it out of the concentration required to keep up the hypnotism.

The Fiend will attack Geralt when it finds him, but upon realizing that it's about to lose the battle it will often flee back to its lair.

The first battle with the Fiend will cause the creature to run away when it's about to lose automatically, initiating a sidequest that Geralt can pursue at his leisure.