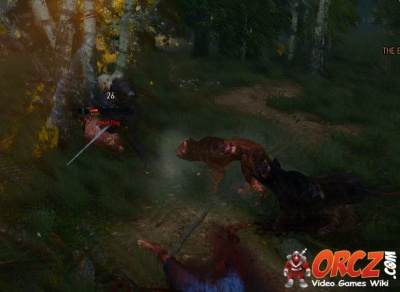 Kill the Wild Dogs in The Witcher 3 Wild Hunt

"Kill the Wild Dogs" is a quest objective in the main story quest "The Beast of White Orchard" in The Witcher 3: Wild Hunt

You found Mislav the Hunter at the Vulpine Woods south of his House. He is busy killing some Wild Dogs and you have agreed to help him.

Use your witcher senses to locate a trail of footprints, and follow them.

When you find Mislav, he is busy killing some Wild Dogs. You can agree to help him or not.

Mislav: It's the truth. Know why?

Geralt: No, but I guess you're about to tell me?

Mislav: Aye, they've learned much from us. Why not cruelty, too?

Mislav: Ah, I see... You a witcher? That monster slayer they's takin' about in the village?

Mislav: I'll show you, sure. But, er, I gotta kill those muts' fore they hurt someone. Will you help? That is, if you dont mind blunting your silver blades on'em

Geralt: Sure, Griffin's not going anywhere

Mislav: No, dogs might, though. So step careful now. Come on.

Geralt: These dogs been a problem for a while now?

Mislav: Since the war started. Soldier on the march, he'll stop to rape a woman, strangle 'er, kill her man for a chuckle, even butcher a cow. But a dog? A kick in passin', no more. So these stray mutts form packs. They're gaunt, guts stuck to their spines, covered in scabies... but they just won't die. Too late. Attacked another one.