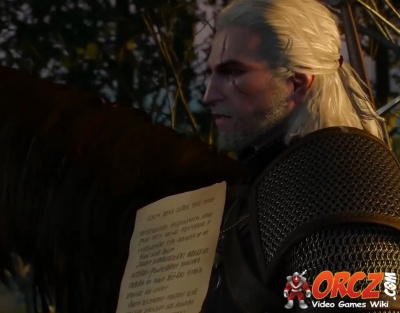 Geralt showing Vesemir the letter from Yennefer at Temeria, Road to Vizima at the beginning of the Witcher 3 Wild Hunt

A letter from Yennefer in The Witcher 3: Wild Hunt.

Geralt and Vesemir are talking about this letter while resting at Temeria, road to Vizima after the Opening Cinematic and the Tutorial

Vesemir thinks they might've overlooked some hint, and wants to Geralt to show him the letter.

Geralt believes they did not overlook anything. Geralt was supposed to meet Yennefer in Willoughby. That's what she wrote. Meanwhile one army or another burned the village to the ground. All we can do is follow her trail, so...

Vesemir insists on seeing the letter. Geralt shows him the letter, and Vesemir comments on how it smells of Lilac and Gooseberries

Vesemir proceeds to read from the letter. "We must meet, soon."... "Willoughby, near Vizima"...Hm, nothing else to guide us there.