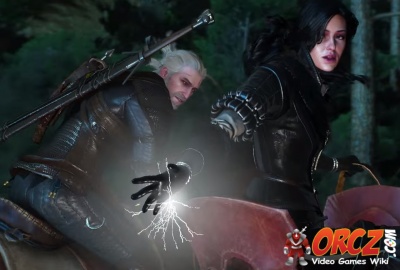 "Lilac and Gooseberries" is a main story quest in The Witcher 3: Wild Hunt

Note: This quest eventually branches out into 2 new quests, The Beast of White Orchard and The Incident at White Orchard, which you need to complete before resuming "Lilac and Gooseberries."

The Opening Cinematic shows that Yennefer is in some sort of trouble.

Geralt and Vesemir are tracking her down after receiving a letter in which she asks to meet Geralt in Willoughby, which has since burnt down.

Yennefer had contacted Geralt - finally. They had not seen each other in years. And then she'd sent him a letter, smelling of lilac and gooseberries, of course, asking him to meet her in the village of Willoughby. "About a matter of great importance," she had written.

So as was his wont when it came to all things Yennefer, the witcher raced off at breakneck speed. Alas, he arrived too late. Passing armies had razed Willoughby to the ground. Yennefer was nowhere in sight. With the help of Vesemir, whom Geralt had encountered along the way, Geralt picked up her trail, which the two Witchers then followed. Yen had ridden north, traversing wild lands and battlefields at great speed She was in a hurry. Perhaps she was in trouble...