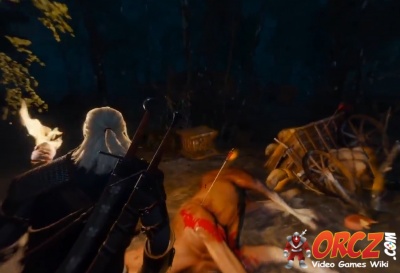 "Precious Cargo" is a secondary quest (sidequest) in The Witcher 3: Wild Hunt

It is one of the sidequests you get at White Orchard, during the Prologue.

You met a merchant on the side of the road who has told you a monster attacked his cart and killed his horse.

The merchant wants you to retrieve a small box from the destroyed cart. He is too afraid to do so himself.

The merchant Geralt found standing by the side of the road in White Orchard was extremely distraught. He had been hauling some precious goods to the Nilfgaardian camp when his horse spooked and veered off the road, pulling the merchant's cart with it and dumping the whole works in the foggy swamp outside the camp. The poor horse became trapped in the muck and soon was devoured by the monsters who inevitably lurk in such places. The merchant was understandably afraid to go retrieve his goods, and thus asked the witcher to do it for him - in return for a sizable reward.

Start the quest by talking to a merchant near the road. Then go back to the road and follow it up north west and use Witcher Senses to locate the Cart Tracks. Those lead you to the Cart. Defeat any Drowners that attack you, then examine the Dead Horse and Cart Driver. Find the Locked Strongbox and take it back to the merchant. You can confront the merchant about his lies, in which case he rides away and you give chase. Knock him off his horse and in the next dialog you can choose whether to let him go or take him to the Nilfgaardian Camp