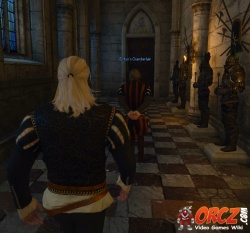 The Hallway at the Vizima Palace

A hallway in the Royal Palace in Vizima in The Witcher 3: Wild Hunt.

Connects between the different areas of the palace

Emhyr's Chamberlain leads Geralt through the hallway to meet the Emperor