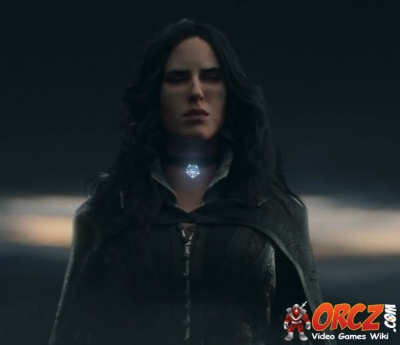 Yennefer during the Intro Cutscene in The Witcher 3 Wild Hunt

Yennefer (also known as "Yennefer of Vengerberg") is one of the main characters in The Witcher 3: Wild Hunt.

Yennefer is a sorceress from Vengerberg, the capital of Aedirn.

She is one of the love interests of Geralt

She is famous for both her beauty and her power as a sorceress.

In the beginning of the game, she is seen in the Intro Cinematic trying to ride through the scene of a fierce battlefield. Her horse gets decapitated by a soldier in heavy armor, Yennefer manages to kill the soldier and use her magic to flee the scene. In present day, Geralt and Vesemir are trying to track her down after Geralt received a Letter from Yennefer in which she seeks to meet him near Willoughby.