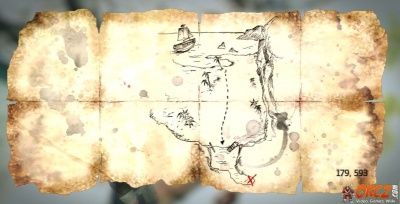 Treasure maps come in many flavors in Assassin's Creed IV Black Flag, but they all lead to treasures such as Blueprints and gold.

How to read a Treasure Maps in AC4

When you pick up a map, it will tell you three basic pieces of information.

The location of the treasure is listed in the bottom right-hand corner. It only tells you the coordinates of the island, not the island name. You can look up the coordinates on your global map to see where it takes you. The coordinates will lead you to the island where the treasure chest is buried, but once there, you will have to figure out where to dig on your own, by looking at the picture and the red "X" (alternatively, you can use the Treasure Map Tool)

Note that some locations may be inaccessible depending on how far along you are in the story, though you should find that most locations are unlocked after sequence 4. Also note that some areas are underwater and may require a Diving Bell to access.

The landmarks are pictured on the map.

A landmark will always be a recognizable feature on the island, such as a windmill, a big tree, or the tower of a castle. Find this and you will be one step closer to finding the treasure.

The precise location of the treasure is indicated with a red X.

This is sort of a puzzle. By looking at the picture and the "X", you can determine where to dig.

Note that the treasure maps are not always aligned north, so it can be tricky to figure out the direction where you have to go.

To dig for the buried treasure, all you need to do is be in the right spot, and an option to "Dig" will appear on the screen.

If there is no option to dig, then you are in the wrong place. Examine the treasure map again or use the Treasure Map Tool

If you are having trouble finding the exact place to dig at, you can run around that location until a Dig option appears.

How to find more treasure maps

There are a total of 22 treasure maps. Most of them are located on islands you explore, and will reveal themselves to you once you unlock the Viewpoint nearest to the treasure map

Some treasure maps can be revealed by talking to a barkeep at a Tavern of a fishermen's village.

Lastly, three treasure maps are found by sending Kenway's Fleet on trading missions in various parts of the world.