Breath of the Wild: A Parent's Love 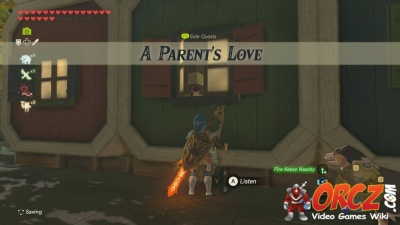 A Parent's Love is one of the sidequests in LoZ:BotW

A Parent's Love is a Quest (Sidequest) in the game The Legend of Zelda: Breath of the Wild.

Listen to Ruli who is talking with her father from the open window behind their house in Tarrey Town to begin the quest.

Ruli's daughter, Hunnie, won't eat anything but cake, and even then she doesn not like them. Ruli needs some help to find a cake that will satisfy her daughter.

Ruli: Our daughter... the only thing she'll eat is cake. Can't anything be done?

Hagie: We've scoured the world, searching for a cake that would please. None have. Imagine how much money we've spent...

Ruli: Papa, excuse me! What's more important? Money or our daughter... I see. If that's the case...Even if I have to sell my soul, I'll get my hands on a cake can cure our daughter!

Hagie: You're talking about monsters now... This is absolutely insane, Mama...

Ruli: Thank you so much! That Monster Cake... Our daughter wolfed it down with unbelievable gusto. It seems her health returned to her! I don't know what to say - I'm just so thankful! Oh, I know. This isn't much, but please take it. Could you maybe... try talking to her some time, as well.

You overheard a fight between Hagie and Ruli, husband and wife. Their daughter Hunnie is sick and won't get better if she doesn't eat. But the thing is, the only food she has an appetite for is cake, and find a particular cake to please her has proven nearly impossible. Ruli is at her wit's end, ready to even trade her soul to a monster if it means finding a cake her daughter will eat.

Where are you going to find a suitable cake? 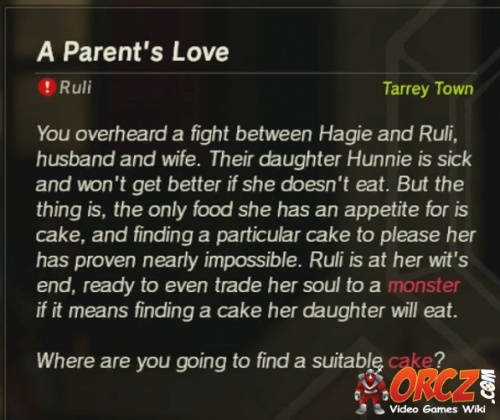