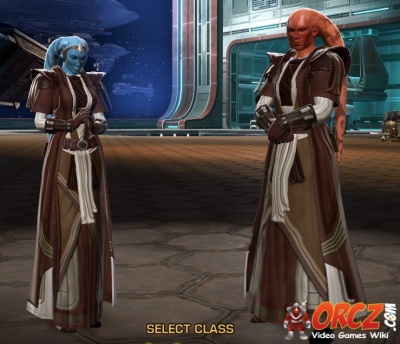 "Jedi Consular" is a class in Star Wars: The Old Republic.

A master of the secrets of the Force, the Jedi Consular is both fighter and healer, teacher and student. The Force can be used to cloud the minds of the weak, restore strength to the fallen and hurl both opponents and objects through the air.

Preferring to stay as nimble on the battlefield as they are in negotiations. Jedi Consulars avoid the heavy battle armor worn by many Jedi Knights. Dense polymers and cortosis armors would weigh them down; light cloaks and ornamented robes suit their strengths better, and the efforts they most often find themselves engaged in. No matter where they go. however, Consulars are never without the lightsaber that marks their initiation into the Jedi Order.

The Jedi Consular is versed in both powerful Force attacks and close-range combat with the double-bladed lightsaber.

Consulars who pursue the Jedi Sage path will find themselves masters of telekinetic attacks, using the Force to knock enemies around and hurl objects at them. Some Sages may also learn restorative abilities that use the Force to heal their allies.

Those that pursue the path of the Shadow are able to use the Force to sneak close to enemies without being seen, then using the element of surprise to best enemies in melee combat with their double-bladed lightsaber. Some Jedi Shadows specialize in defensive abilities, allowing them to shield themselves and their allies from harm.

The Jedi Consular has the following specializations:

The Consular's powers go far beyond meditation and mediation, and nothing illustrates this as vividly as their graceful movements in battle. Whether beset by an army of assassin droids or caught in the middle of soured negotiations, the Jedi Consular fights with an open conduit for the Force; manipulating massive forces to disable, or even destroy, their enemies.