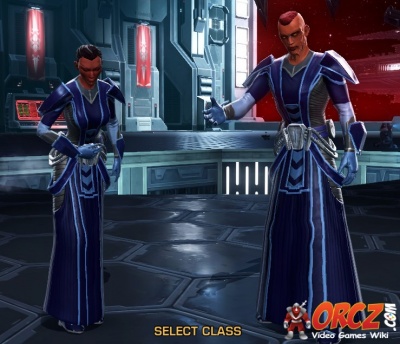 "Sith Inquisitor" is a class in Star Wars: The Old Republic.

Where a Sith Warrior is rage, an Inquisitor is cunning. A master of Force Lightning and arcane secrets, the Inquisitor can hold one enemy in the air and stun another all the while attacking with lightsaber moves designed for maximum pain.

Asserting power and authority is one of the highest priorities for the Sith Inquisitors. Their choice of attire reflects this strategy, as they often prefer dark, high-contrast robes to express their sophisticated tastes and ambitions for political control. Nonetheless, despite regal appearances, great attention is given to ensure all their attire allows the flexibility for stunning acrobatics in lightsaber combat. Of course, some Inquisitor outfits take expression to the highest extreme-designed to inspire sheer terror in those the Inquisitor comes into contact with.

The Sith Inquisitor is deadly due to his skill with single and double-bladed lightsabers. as well as his ability to fire powerful bursts of Force Lightning from his fingertips.

Inquisitors who pursue the Sith Sorcerer path learn to master Force Lightning and other dark Force attacks, inspiring fear and dread in their enemies, siphoning the life out of them, or using the powers of the Force to restore life to their allies.

Those pursuing the Sith Assassin path learn to cloak themselves in shadows, sneaking up behind enemies with their double-bladed lightsaber and unleashing saber and lightning attacks at close range. Some Sith Assassins specialize in defensive abilities, allowing them to shield themselves and their allies from harm.

The Sith Inquisitor has the following specializations:

Whether facing a traitorous fellow Sith or a crowd of Republic soldiers, the Inquisitor fights with unlimited fury to create a storm of destruction. Expertise in conducting Force energies further allows Inquisitors to draw upon the life essence of themselves and others. This energy can be channeled to bolster their powers, harm their foes, and even to reinvigorate their allies. An Inquisitor's skills with a lightsaber are equally impressive. Often wielding a double-bladed lightsaber. Inquisitors use quick, guileful and lethal maneuvers to strike their enemies down with astonishing speed.