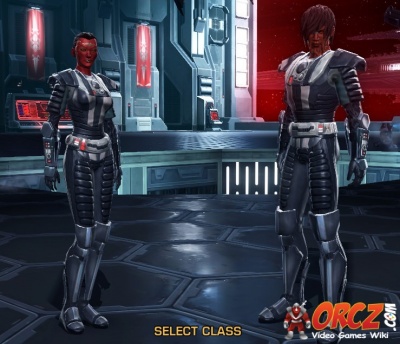 "Sith Warrior" is a class in Star Wars: The Old Republic.

No one inspires more fear than a Sith Warrior. Born for battle, few opponents can withstand the rage-fueled blows from a Warrior's lightsaber or penetrate a Warrior's armor. If dual-wielded lightsabers can’t finish the job, there is always Force Choke to bring an opponent to his knees.

Despite their reliance on their strength in the Force, Warriors have no compunction about donning heavy and intimidating suits and armors. Unthreatened by the use of technology for biological augmentation. Warriors’ vestments often make use of dangerous and experimental components that imbue the wearer with immense strength and fortitude.

The Sith Warrior is a fearsome melee combatant skilled with both single and dual lightsabers. The Sith Warrior uses Dark Force powers in addition to his close range saber attacks, though not as many as the Sith Inquisitor.

Warriors who become Sith Juggernauts continue to specialize in single saber combat, and may learn defensive lightsaber forms to help shield themselves and allies from incoming attacks.

Warriors who become Sith Marauders become versed in combat with two lightsabers. and learn powerful attacks that utilize both weapons.

The Sith Warrior has the following specializations:

A Sith Warrior's skills with a lightsaber are unrivaled. Driving at their enemies with strong, crushing blows. Warriors quickly beat their foes into submission or death. Though the lightsaber is their primary method of attack. Warriors also use their dark command of the Force to paralyze, terrify and kill. Protected by heavy armor and their powers of intimidation. Warriors wade into the thick of the fight and unleash pure hatred and fury to eliminate all who would stand against them.