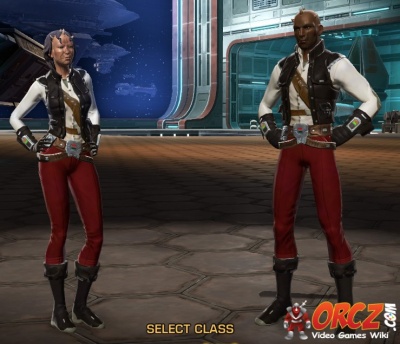 "Smuggler" is a class in Star Wars: The Old Republic.

Living life by their own rules, Smugglers are the galaxy's most unpredictable characters. They dress for ease of movement-with a healthy dose of style-carry one or dual blasters and are always ready to shoot first, stealth up and sneak away after.

They don't wear fancy armor or carry high-powered blaster rifles, but Smugglers are outfitted for action nonetheless. Wearing comfortable, flexible clothing with some custom modifications. Smugglers are able to stay light on their feet and quick on the draw. Usually carrying a fast-firing blaster or two. Smugglers have everything they need to shoot their way out of trouble. Though style is rarely their intent, it seems to come naturally to Smugglers, and their dashing duds generally complement their roguish charm.

While the Smuggler is primarily skilled in the use of blaster pistols, he can also use an arsenal of gadgets and tech to help him gain the upper hand in combat. Smugglers use many types of grenades, as well as flashbombs, scramblers, smoke bombs, shield generators, and weapon modifications.

Smugglers who become Gunslingers learn to use two pistols, and will utilize both environmental cover and their portable cover generator to avoid enemy fire.

Smugglers who become Scoundrels will use their personal stealth generator to sneak up behind enemies and blast them from behind with a powerful scattergun. Some Scoundrels may learn medical techniques to help keep their allies healed.

The Smuggler has the following specializations:

The Smuggler's approach to fighting is guileful and improvisational. Preferring to tip the odds in their favor from the start. Smugglers often rely on the element of surprise, using stealth and trickery to catch opponents off guard. Despite the sly tactics, they are more than capable of holding their own in a fair fight. Fast on the draw and a crack shot with a blaster. Smugglers tend to shoot first and be the last ones standing.