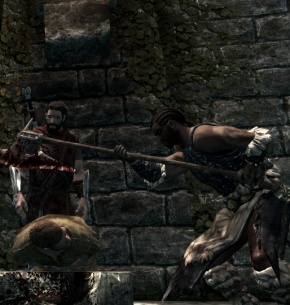 Roggvir being executed in Solitude

Svari, his niece, is standing near with her father, Addvar

Svari: They can't hurt uncle Roggvir. Tell them he didn't do it

Addvar: Svari, you need to go home. Go home and stay there until your mother (Greta) comes.

Several citizens are also watching the execution, swearing at Roggvir and calling him a traitor.

Aldis: Roggir. You helped Ulfric Stormcloak escape this city after he murdered High King Torygg. By opening that gate for Ulfric, you betrayed the people of Solitude.

Roggvir: There was no murder! Ulfric challenged Torygg. He beat the High King in Fair combat. Such is our way! Such is the ancient custom of Skyrim, and all Nords!

(A lot of booing from the crowd)

Roggvir kneels and is about to be executed.

At this point, the executioner strikes with his axe, decapitating Roggvir