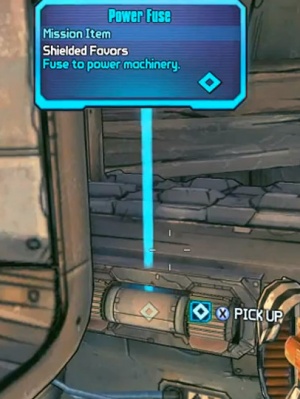 Shielded Favors is a side mission in Borderlands 2

Cleaning Up the Berg

Run through the fence

If You're gonna survive out there, you'll need a better shield. I humbly suggest paying a visit to the old Crimson Raider safehouse. You'll need to take the elevator up there.

Hammerlock: Of course, I forgot - the safehouse power box stopped working after Claptrap attempted to... integrate with it.

Claptrap: Ah, what a kidder! Just get a new fuse for the elevator and ignore what he said about that power box.

Claptrap: Ooh - there's a fuse on the other side of that electric fence! Just run through the fence - you won't take damage if you go fast enough!

Claptrap: Just plug that fuse into Brewester's Powerbox, and you'll be able to ride the elevator!

Sir Hammerlock: Got the elevator working, have you? Great! Now simply ascend to the safehouse and buy a shield This used to be a sizable hub for the resistance, until everyone heard the Hyperion army approaching and fled to Sanctuary

Sir Hammerlock: Well done! Now, if you could return to Liar's Berg, we could see about getting you off this frigid glacier

Sir Hammerlock has suggested that if you're expecting to leave Southern Shelf alive, you'll need a better shield. He wants you to head to an abandoned shop and former Crimson Raider base known as Brewster's Shield Bashers. Once there you can purchase a better shield.

You got a new shield! If it works, your life on Pandora will be much easier. If it doesn't work, you'll find out REALLY quick.

Go to Gateway Harbor to the west. You discover that the elevator is not operational because of a missing fuse; an available substitute can be taken from another nearby compound, located behind the crackling electric energy fence. Claptrap insists if you go run through the barrier quickly, it won't hurt you; ignore him because it will. Your Guardian Angel offers sounder counsel, advising instead to shoot out the fuse box to deactivate the energy barrier. Afterwards, enter the compound and remove the fuse from it's slot in the generator. There is a Portable Toilet Treasure Closet to loot. There is also a family of Bullymongs to the right if you wish to battle them. Otherwise, return to the first compound with the dead elevator. Plug the stolen fuse in to this generator and now pull the lever to get the elevator and ride up. Enter inside and purchase a shield from a Dr. Zed's Meds vending machine there. Loot all boxes and lockers. Before leaving, take the back door to the outside; step off the patio and onto the snow. Now, go around to the right side and walk upwards on the loose metal siding protruding outward from the building; carefully jump onto the crane; turn around 180 degrees and jump back onto the roof. Move forward towards the wire roof and drop down onto it, turn 180 degrees around again and climb onto a hidden terrace. Discover the hidden Vault Logo on the floor and loot the large treasure box.

Note: Unfortunately, if you already have a shield and don't need one, you are nonetheless not allowed to complete this mission until you actually purchase a shield from the vending machine.

If you don't have enough money for the shield, sell some of your excess weapons.