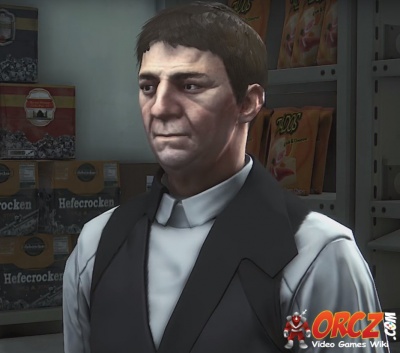 Edward Brod is a person in Deus Ex: Mankind Divided.

Not too much is known about Edward Brod from his early years save that he lived in Warsaw Poland during the time of the Polish Martial law.

He has received a neural augmentation to help make the most of his time with his family and grandchildren. When the Aug Incident of 2027 struck, he lost control of himself and killed the youngest of his grandchildren before the signal was interrupted. Because of this event, his son-in-law has kept him away from their family. Edward continues to hope that his son-in-law will let him see his family again and he can make amends.

Edward is old and feels like there is not enough strength in him to survive Golem City. To help ensure he could stay, he struck a deal with Drahomir, to help secure his place in Prague. he quickly found himself in a position where he could not afford the prices that Drahomir was asking.