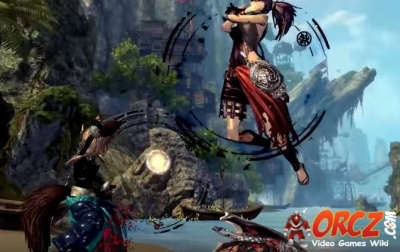 NOTE: Credit to original guide goes to /u/aguyinag from Reddit.

First off, there are 8 common types of CC:

There is also a special case that can be called “Disabled” which happens with certain class moves.

A “soft” version of stun.

Can be used to punish F (Retreat).

Force Masters are able to SS out of Dazes.

Assassins are able to flower (Lotus of Escape) out of Dazes.

Force Masters are able to SS out of Stuns.

Assassins are able to flower (Lotus of Escape) out of Stuns.

In addition to being incapacitated, you will regenerate a respectable amount of health over time if you are unconscious. Usually will last 30 seconds (I don’t know of any that don’t last 30 seconds).

Similar looking to Knocked Down, but there will be bubbles(?) above your head to indicated unconsciousness. Ends upon taking damage.

On using 1 (most classes): if you are damaged during the get up animation, you will be knocked down again. Some classes will give CC resistance on successful recover. Ground counter is self explanatory, most classes can counter attacks made on them while knocked down. Summoner, Force Master, and Warlock cannot use this.

When falling from being Airborne, you will land in Knocked Down condition.

Many classes utilize Knocked Down to punish an F (Retreat).

Force Masters are able to SS out of Knocked Down.

Blade Masters, if they are specced for it, can block while knocked down.

Assassins can prolong Knocked Down status by using their Tab (Web) move. Web prevents escape by F (Retreat) and escape during Web is only possible by taking damage, Tab (Escape), or running the duration of the web out.

On becoming Airborne, you cannot be damaged by most characters on the ground without the use of an aerial attack. Upon landing, you will be put in the Knocked Down condition.

Aerial attacks can be delayed to buy time while the enemy is in the air because they “refresh” the Airborne duration.

Assassins can prolong Airborne status by using their Tab (Web) move. When you are webbed in the air, you cannot escape by any means other than taking damage or running the duration of the web out.

There will be a bar the bottom of the screen showing the duration of the Grab. When you are grabbed, you have four options. Using 1, retaliate against the opponent and do minimal damage back to them as they grab you. Using 2, attempt to counter their attack. Using Tab, escape immediately from their grasp. And finally, simply waiting.

When they have grabbed you, they have a few moves at their disposal. They may either “auto attack” you, or use a “special attack” (1, 2, 3, 4 on most classes) only usable during grab. The auto attack may not be countered using the 2 (Grab counter), but the “special attack” can be. By pressing 2 just as they use their special attack, you can counter it and escape the grab. If you want to know more about the counter, there is a section on grab counters below. Blade Master and Blade Dancer have a special escape similar to Tab but only for Grabs, Grapples, and Force Grips. Knocks back.

Kung Fu Master has another method of breaking out of Grabbed and Force Gripped. Their 3 allows them to freeze (snare) nearby enemies while breaking them out of Grab/Grip and putting them in a Frost Prison state.

Force Masters have a special “Aerial Phantom Grip” that works as a combination of Airborne and Force(Phantom) Gripped. This means you are unable to escape from it. Only the 1 (Retaliate) skill is available to you. 2 (Grab counter), Tab (Escape), and F (Retreat) are unusable. Blade Master and Blade Dancer have a special escape similar to Tab but only for Grabs, Grapples, and Force Grips. Knocks back.

Kung Fu Master has another method of breaking out of Grabbed and Force Gripped. Their 3 allows them to freeze (snare) nearby enemies while breaking them out of Grab/Grip and putting them in a Frost Prison state.

There will be a bar the bottom of the screen showing the duration of the Grapple. A combination of both Grab and Knocked Down. The opponent will be on top of you, holding you down so you cannot retaliate using your 1 skill like with Grabbed and Force Gripped. However, you can still counter their “special moves” using your 2 counter skill.

Blade Master and Blade Dancer have a special escape similar to Tab but only for Grabs, Grapples, and Force Grips. Knocks back.

What I call disabled is simply the miscellaneous category for CCs that cannot be sorted into one of the above types. One of such CCs is the Assassin’s Tab Switch skill. When you are swapped by the Assassin, there is a short amount of time where you are unable to do anything. For lack of a better way of describing it, I call it a Disable and file it here. Yuketsu’s Assassin guide calls it a Disable as well.

Note that the above says actions unavailable. Most abilities are available to you while you are rooted or snared, so I was hesitant to include this in the list, as it seems to me more of a debuff/condition than a true CC.

Classes that are able to snare include:

Summoners have an AoE root ability that acts as a snare. This ability is functionally equivalent to a Force Master’s and Kung Fu Master’s freeze snare. Not much to say about it.

Force Masters can freeze you in place. This is covered a little more down below.

Kung Fu Masters have an ability that both freezes characters around them and “counters” any incoming damage or CC by placing them in what’s known as a Frost Prison (similar to Deep Freeze).

The easiest way to escape a snare is to simply SS. Using SS will break the snare and allow you freedom of movement and camera control again. In a similar fashion, most classes can Q and/or E to break snare. Another method is to use a movement ability. Some movement abilities, such as the Kung Fu Master Tab Slam will break snares. However, be warned that if a Force Master has you snared, you most likely have the Frost debuff on you as well, locking movement abilities. The interesting caveat is that SS is not locked out by Frost, so you can still SS out of a Freeze.

There are also other ways of breaking the snare depending on your class. For example, Blade Dancer’s Tab (Vortex) and Blade Master on block LMB (Cyclone) can break snare. I don’t know enough about every class so I’ll hold off on trying to cover them all.

Ice Type CCs/Debuffs I don’t know enough to elaborate too much. I will say that there are three types that I’ve seen (note the names may not be accurate):

Chill prevents most movement abilities. Does not prevent SS. When 3 stacks of chill are applied to a target, the chill stacks are removed and a Freeze condition is applied.

Freeze is a snare. You are still able to use abilities but you may not move nor turn your character’s direction. Most SS abilities will break freeze. Similar to Summoner’s root ability, both will snare and prevent camera movement. Chill can be stacked on a target that is affected by Freeze.

Frost Prison causes you to become invulnerable to everything, but unable to move, turn, or use abilities. There is a mechanic for which if you intentionally put yourself in a Frost Prison, Frost Prison can be escaped on command. Most often, you’d place yourself in Frost Prison in order to delay the fight or avoid a specific ability. Available to Force Masters and Kung Fu Masters.

Note: Assassins also have a Frost Prison on their Z (Mine) ability if specced. It will expand the range of the mine and also cause it to Frost Prison enemies in the blast zone.

Every single class has a “get-out-of-jail-free card” called your Tab escape. Most of them will need to be specced to escape from certain CC types, and some can daze as well. Make sure you know what each classes’ Tab looks like.

Force Masters have a second way of escaping Stuns, Dazes, Unconscious, and Knockdowns using their SS. The SS must be specced to remove CC and it will also freeze targets around them when used.

Assassins also have a second way of getting out of Stuns and Dazes. Their flower (Lotus of Escape) can be specced to remove Stuns and Dazes. It will move them to the location of the flower as well as remove the CC. However, they must have already placed the flower down before they can use it as a CC cleanse.

Assassins specifically have two skills that can blind you. The two skills are: Tab and 3 (Swiftstep). The Tab will drop a flashbang from where they escaped from, this can be iFramed. The 3 (Swiftstep) has to be specced to blind and can only be used from stealth. This debuff makes your entire screen white, but does not otherwise affect your character besides a very short disable at the beginning of the blind.. You can still see your UI and the name above the opponent’s head.

When a character uses F, they get iFrames during the animation of the retreat. However, as soon as they land back on the ground coming out of the F, they are vulnerable to damage and CCs again. This window of time comes a split second before they are able to use abilities and move again, so use of this F can be punished.

With many classes, you want to make the opponent use their Tab (Escape) early on, so you can stunlock and combo them. Once they’ve blown their Tab, the only option available to them for some CC types is F. If you know how to punish and keep them in a stun lock after they use F, you can use the “soft” CC types as hard CC (“soft” meaning CC types that can be F’ed out of). To take advantage of this, you want to bait out their F by putting them in a Knocked Down, Dazed, or Unconscious (not common) state. If you expect them to F out of the soft CC, try to position yourself behind them to immediately CC them as they come out of it (or just use a ranged/charge CC skill). You’ll need to practice the timing to hit that tiny window of opportunity.

The counter available to you during one of these CC types is different from both ground counters and normal class specific counters. In this case, you do not want to counter before the move hits you, rather, right after you see the animation begin for the move. For example, one of the more telegraphed moves you can counter is the Blade Dancer’s stick-a-sword-in-your-head move. Right as the sword flying in is about to hit you, you press your counter, 2, and it should break you out of the Force Grip.