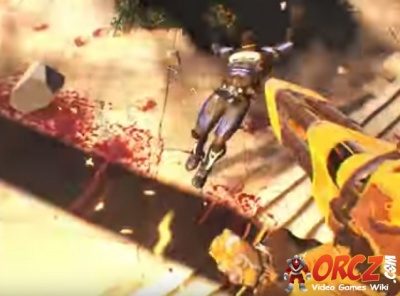 The Vanguard's ultimate ability, Starfall, causes damage in an area, as well as leaving a low gravity pocket in its wake

This is a tutorial on how to properly use Vanguard in LawBreakers.

This Vanguard guide is based on the dev tutorial video.

The Vanguard class excels at skirmishing. She can fly around the map, superfast crossmap mobility, great at running objectives and stealing objectives, and she's got great sustain damage, burst damage, very much all around, but not super-tanky, so you're going to want to not take a bunch of damage, or you're going to get blown up.

Hydra Gatling Gun: The Hydra is a DPS monster. When you press and hold the trigger it's going to start spooling up, increasing both rate of fire and precision. So the DPS is going to ramp up really fast there.

Pulsar: Pulsar is the Vanguard's alt-fire. It deals damage in a cone in front of you while consuming some fuel and knocking you back. This is a really great tool for enemies that get up in your face. You can actually use your Pulsar while firing your gatling gun so enemies get up in your face, you're going to start shooting them up with that gatling, then immediately combo into that pulsar for burst damage.

Afterburners: Of all the Vanguard Abilities, this is your bread and butter. Vanguard excels in getting to places on the map that enemies don't expect you to come from, crossing the map really fast, contesting objectives, and otherwise being a nuisance. Youre going to attack enemies from angles they don't expect so they don't see you coming, you can lay down your sustained DPS with that gattling gun and buy a little time for yourself to spool it up to max potential.

When you press and hold the button you're going to fly along the aim direction while consuming fuel.

This is another Vanguard ability you can use while shooting the gatling gun.

When you press the button, you're going to fly through the air, revealing enemies, and then pressing down, dealing damage on impact, and also leaving behind a zero-g pocket that's great for throwing your enemies up into the air and generally causing chaos.

Starfall deals damage in the area and bonus damage for direct hit, so if you can actually hit enemies directly with it, really easy to get a one shot kill.